How to interpret "Uninstall the following ..." in the SailfishOS-updater?

After Downloading the update to Suomenlinna (4.3.0.12) I got the message “Entferne die folgenden Pakete,…” (English: “Remove the following packages…”). On several Answers here I read that I can ignore it. But if I can ignore this message, I wonder if it means that the system will automatically uninstall the following packages and I don’t have to do anything. I take a screenshot of it (Thats why I wrote the message in German): 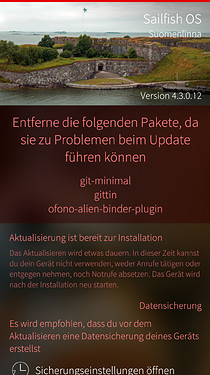 I had some problems removing/installing this Peckages via the Terminal (I made a pkcon refresh before doing that):

Yes, the message “Uninstall the following before proceeding with the Sailfish OS update” (plus a list of RPMs) shown shortly after starting to download a SailfishOS update is confusing users since its inception (in English and all correct translations):

As I have written at Openrepos, “the UI is minimalistic, not self-explanatory, and without feedback what is done.”. Necessary improvements from my POV are:

I wonder that no one a Jolla seems to have understood the support efforts this creates, which become apparent after each release in this forum!

P.S.: Currently (i.e., since SailfishOS 3.4.0 up to 4.3.0) this message seems to primarily frighten, scare and confuse people, driving them to take actions they do not comprehend (removing RPMs manually, often among them system RPMs, because the discussed message tells them to), without much positive effect, but often a lot of negative effects (→ broken SailfishOS installation, creating the necessity to re-flash).

IMO the general advice should be to ignore that message, if you do not fully understand it (and IMO currently no user can, due to the lack of information in the message displayed and the lack of any documentation for this “feature”).

P.P.S.: Note that disabling the affected repositories is done later in the update process: I was only able to observe that when the new SailfishOS release booted (but have not had the chance to take a look at a failed update).

P.P.P.S: For some additional information see Update from 3.4.0.22 to 3.4.0.24 urges user to remove system packages - #2 by abranson (note that abranson is a sailor, hence his answer is rather authoritative, in contrast to my guesswork).

Thank for your declaration

As I have written at Openrepos, “ the UI is minimalistic, not self-explanatory, and without feedback what is done. ”. Necessary improvements from my POV are:

I fully agree with you.