There is NO way this update was tested. Nothing hardly works

It IS necessary to allow ‘untrusted software’ , make an account on OpenRepos, install Storeman & enter the credentials of the OpenRepos account into Storeman. Otherwise it will not work.
And - Storeman very often forgets the credentials - remembers them only for a few days. This is known bug, don’t worry about that.

Sorry for the follow up…I don’t see an install. for the application 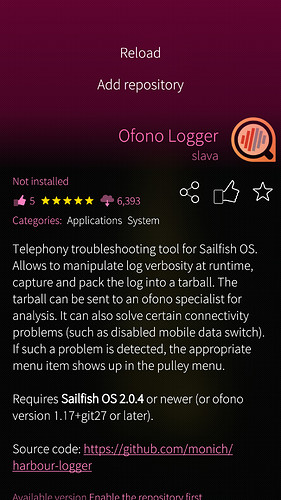 I don’t recall to ever having made an account on openrepos and entering any credentials.
If I check the settings in storeman app, there is a log in option, so I appearantly am not logged in, but I still can install software

you have to add repository, then you can install the app

Thanks for information, I did not know that this is possible and made an account immediately in the beginning of all my SFOS activities.

@808 In general, as @davidrasch said before, on installing something from Openrepos, you have to add the repository first, then you can install the software (edit: in a second step). Every repository has to be installed only once, then it stays installed and there is no need to add again if installing further software from the same repository at later time.

The Jolla crew will figure it out.

I sure hope so. I stayed on 4.1 to avoid further problems - until now, when the update notification started to annoy me too much. So I did the update thinking “well, it’s been quite a while that 4.2 is out, it’s probably okay by now” and then I jumped on to 4.3 immediately, because I only realized how young that version was when I started to research about the troubles the phone now gives me.

As for updates, when I read the description of what they do, my mind goes “don’t care. doesn’t help, couldn’t care less”.

For years I feel that Jolla IS TOTALLY NOT listening to the users. For me as being someone who isn’t involved it seems like they “just randomly do stuff”. The UX tends to get worse as it becomes more and more an Android knock-off.

For me, if the entire focus was on improving the base system and let APK’s and SFOS community take care of apps, that would already be perfect. I wonder how many share this opinion?

I think there is something MAJOR that newcomers don’t seem to know or understand…are ya ready for this bombshell?, ahem!,DRUM ROLL PLEASE!!!..BBRBRBRBRBRBRBRBRBRBRBOMP!!,TSH!!!..

SAILFISH OS is a CORPORATE OPERATING SYSTEM and is not really AIMED at END users who just ‘want things to work’ - maybe that will help you make up your minds about several things, but, just to reiterate, the OS is aimed at CORPORATIONS and not the man in the street.

We are BUG HUNTERS and WE PAY FOR THAT PRIVILEGE, if you don’t like Jolla’s business model, take yourself OFF this forum and quit filling it with nonsense along with all whinging and whining, dumb feature requests and the like, and YES, I am guilty of nasty, horrible comments aimed directly at the really POOR parts of the OS, until I realised it is not about US, the end users, it is about shaping an OS fit for CORPORATIONS and soon (I hope) Jolla will be looking into the AUTOMOTIVE industry!

The paltry fee you/we/I pay for the OS barely covers the admin involved in making the OS available for ‘public use’, so for those of you who have paid, QUIT WHINGING about the cost!, nobody held a gun to your head forcing you to buy, YOU decided, YOU paid and now you don’t like it?, well, there is always the expression - “BUYER BEWARE!”

IF, I have any of this wrong, or I misunderstand things, please, do let me know…I’m sure some of the more eager newcomers will be FULL of things to say!

FULL of things to say

Just one thing: Why would corporations not want a stable OS?
(No, I don’t think something great will come of a mediocre process - even if that process is applied for many years.)

Clearly you misunderstand. I’m not arguing with you or anyone else.

Jolla is a Corporate Operating System, but seems that Sailfish X is for end users.

since this is getting overly complicated…

JOLLA OY is a Finnish company established from former Nokia devs after their dissatisfaction of how Nokia saw the open-source field, thereby killing OS2005 (responsible for the Nokia Internet Devices of yore) and Meego.
SAILFISH, whether it is just Sailfish as a B2B product, or Sailfish X Free and Paid for end users, is the operating system, and therein, their whole product. Aurora is an otherwise full contract with Rustel and is more their project upstreamed to Sailfish.

in terms of what we’re paying for, I wouldn’t be surprised if a hefty chunk of it was going back into Sony and companies supporting this initiative, to ensure a monetary incentive to offer the freedom of bootloader unlocking, rooting, and these custom OSes. Regardless of the cost, it IS a payment made, and we ARE paying customers. Calling it whinging is ignorance to that. At the end of the day, it doesn’t matter what we, the community, want from Sailfish. What matters is that the product is stable and reliable, and its shortcomings don’t impede that. If we truly are beta testing this product, then the entire stack should be labeled as such, and more importantly than that, those bugs need to be quashed.

Regardless of this, Jolla is the only company whose Linux-based mobile phone operating system is not simply a developer-only system. Beyond the bugs, glitches, and lacking features, Sailfish OS 4 is at least a matured, and smooth experience that, for a large number of users who maybe don’t go outside the Jolla Store for any of their app needs, and who might not even be using the Android support, it already is daily driver material. It’s obvious that Jolla is not trying to appeal to elderly folks or millennials, but they’re offering a product with much higher privacy and security benefits than competing software is doing. If they wanted to have mass appeal, I’m sure they’d have done what Samsung did with Tizen, baking smaller embedded versions of Sailfish OS into smaller products like smartwatches (remember that demo?) and then making those products widely available to slowly build up a userbase on a different scale. But that’s not what has happened, and the reality is that we have maybe 10 total supported devices under the Sailfish X model, and some of those have already been deprecated due to Linux kernel support.

A stable OS for a majority is key. Anything less justifies a refund.

The only thing that bothers me is the not mature update process. First many messages what I should uninstall everything and then after the update it does not run smoothly. after a complete reflash runs the XA2 except for the bad GPS (no hardware error) really great. but that can not be the goal every time to re-flash the phone. I see the license purchase rather as a donation in the hope that my generated data will not be abused for advertising, etc…
I have also already managed to get away from Android except for 2 apps. If someone wants to use a lot of Android apps, maybe this operating system would be the wrong one.

Beyond the caricaturist post of @808, the underlying issue of the anger, frustration or disappointment when using SFOS is due to:

I am just wondering why I am happy with 4.3 on my Xperia 10 ii. I am just a user without dev skills. And I am not frustrated. Ok. loss off mobile connection for too long a period of time (up to a couple of minutes) and loss of internet connection for Android apps from time to time (requiring stopping and restarting of android support) annoy me too. But I am glad that so many things are just working - in particular file handling (Music and photos, on the SDCard or the internal memory, Email attachments etc.), something I am really messing with Android or iOS

Personally, I’m not frustrated but quite happy with SFOS

But I do understand people who might get the false impression they’re getting a 1-to-1 replacement of Android/iOS and end up having something not fit to their needs.

I’m happy with SFOS too. But 3.4 is currently my daily driver and 4.3 is an experimental playground

I think we almost need a stable/testing dichotomy that differs from the current release schedule. For normal users, I mean. But, frankly, I don’t know how that should look. It’s clear that the ‘new phone’ issue makes this completely different from the problem on PCs.

Anything less justifies a refund.

Well, good luck trying to get a refund on a free product. The only thing you pay for when you purchase a license is Android support, keyboard predictions, Exchange support, easy access to updates and, of course, access to customer support. Everything else can be installed and used by anyone regardless of whether they paid for a license or not. It is perfectly possible for people to officially install and run Sailfish on their device without ever paying Jolla a single cent.

Otherwise your post hits the nail on the head.

But I do understand people who might get the false impression they’re getting a 1-to-1 replacement of Android/iOS and end up having something not fit to their needs.

Well, if it is a false impression then it is one Jolla have been actively promoting themselves on their website for a long time. They are still positioning Sailfish as a ‘a European alternative to dominating mobile operating systems ’ (Jolla website, about Sailfish ).

The only possible reasonable interpretation of ‘dominant mobile operating systems’ can be IOS and Android, and if they are saying that Sailfish is an alternative then they are clearly giving the impression to any potential user that if they install Sailfish on their phone then they can expect the same sort of maturity, reliability, security, functionality, etc as the ‘dominant’ IOS and Android systems (what other interpretation could there be?)

I can therefore well understand why there are disappointed ‘normal’ users when they later find out that Sailfish is really only a niche product (albeit a very good one - when it works!) for technically capable users who are prepared to tolerate broken functionality and outstanding problems, sometimes for years, and often having to invent their own technically complex (for any normal user) patches or workarounds to keep the show on the road.

Perhaps if Jolla was more honest with its marketing, specifically for Sailfish X, targeting it openly at the ‘technical user market’ or whatever words would adequately explain that it is not really a product for ‘normal’ users, then there would be a better match of expectations.

Multiple release branches. Right there on the update screen. Experimental / Update/ previous with the understanding that you may be exposed to vulnerabilities that were fixed in the update branch.

trust me If I could go back a few versions I would.

Please explain why MMS can’t send more than one picture to one person at a time.

I don’t need someone like you to explain anything.

Since ‘someone like me’ is clearly beneath contempt for you, I won’t bother.