Last week the updated Sailfish SDK went out to all users. If you’re an SDK user you’ll hopefully have already received an update notification from inside the IDE. We already covered the details of the update in the last news update, so we won’t cover them again here. Instead, we thought we’d look at some of the recent contributions from community members that have made it into the OS, or which we’re hoping will make it in soon.

Previously we mentioned about the URL aware file handling that was being merged in as a contribution from Mister Magister. Jolla team lead developer Pekka Vuorela worked with Mister Magister to get the PR merged, and here’s Pekka now with a summary of the changes, and how other devs can now make use of them.

The pull request mentioned in the earlier newsletter, among with small adjustments to other components, is now merged, and with those it’s now possible to register applications to handle URLs containing specific hostnames.

The registration is done by adding to the application’s .desktop file mimetype line an entry with x-url-handler/<hostname>. It will apply to http and https URLs. For example:

After the next software release it’s recommended that applications handling only specific domains replace existing x-scheme-handler/http type of registrations with such. That way opening a generic URL will not ask the user which application to use, only the specific URLs. 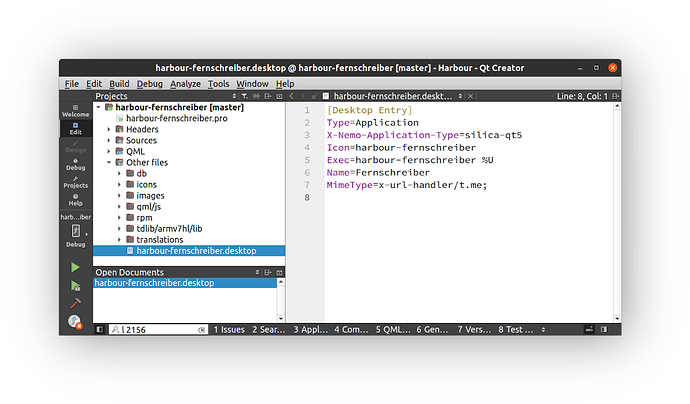 Any wild cards are not supported yet as we’ve left this for future work. It was discussed that we could use mimetype parameters for that, but as desktop-file-utils does not currently cope with such the plan might still change. As a result, there’s some chance that the mechanism might get more adjustments later.

Also to be noted that when registering mime types in .desktop files, the update-desktop-database should be run after installing the package in %post (or manually). However this is not yet allowed by the Harbour validation, but we are working on it.

We’re looking forward to seeing broader adoption of this new URL handling in community apps. This last week we also saw a further contribution of Mister Magister’s being merged into the mainline, this one related to the camera. We know the camera is an important feature for many Sailfish OS users, so this is something we’ll discuss in a future community news update.

It’s exciting to see a whole heap of contributions to the OS being worked on by various other community members too. SeaPrint is a brilliant app we mentioned in a previous update, developed by attah to bring printing to Sailfish OS. Attah is planning to extend document support from PDFs to other available formats such as ODT.

One possibility is to reuse the Calligra document library that the OS is already using. Calligra is a KDE project for desktop use but which is versatile enough to be reused as a backend for the document application in Sailfish OS. The KDE implementation provides a converter but it seems this part was suffering from various issues that prevented it being packaged for Sailfish OS.

Thankfully dcaliste has now corrected the issues upstream and inclusion inside Sailfish OS is now under review.

Still on the Document app front, ApB has provided a file that causes the application to crash, and Leinir (who initially ported Calligra to Sailfish OS and created the QML components used by the application) has now accepted the correction upstream to avoid the crash. Inclusion of this change into Sailfish OS is still pending.

Thank you to all of the contributors. One of the most exciting parts of working on Sailfish OS is to see contributions from the community get merged into the operating system and released to users.

As always, there have been far more updates to apps from the community than we can include here, but if you particularly want to be featured in the next update, please let us know by replying to this post. Here are some of the ones we noted.

Defender has been updated for SFOS 4.0, providing adblocking and increased privacy when browsing the web. The latest changes were worked on by Peter Leinchen as part of his “Sailfish Devember” development push, building on the original work by nodevel . Most notably, the new version fixes a bug which prevented it working on encrypted devices. It’s great to see Devember bearing fruit for Sailfish OS; grab yourself a copy from OpenRepos.

L’attestation de sortie is a neat tool from Julien Blanc for users in France for generating the compulsory exit certificate needed for going outdoors after curfew. It may not be the most important app for users outside France, but for those living in the country I’m sure it’s a must-have capability, and really nice to see it on Sailfish OS. The latest version provides updates based on changes in the requirements for generating the form, and is available from OpenRepos.

Quartermaster from Samuel Kron provides a way to control your IoT-enabled home. It hooks into a Home Assistant server, which claims to put “local control and privacy first”, allowing you to control things like cameras, thermostats, lights and so on. The latest version fixed a bunch of bugs and is gradually moving towards full support of the server functions. It’s available from OpenRepos.

So if automating your home isn’t enough, why not also try Situations for automating the behaviour of your phone? Situations is cross-platform from Pastilli Labs and developed by Heikki Haveri. It will reconfigure your phone based on your context, for example by automatically switching it to silent based on time of day, or changing connections based on your location. The latest changes add an internal viewer for the log and it’s available from the Jolla Store (the version on OpenRepos is outdated). See the Pastilli Labs website for more info.

The Sailfish OS forum and #sailfishos IRC channel are of course the best* places to discuss Sailfish OS topics, but they’re certainly not the only places you can find Sailfish OS discussion. There are many really great channels for often more conversational discussion about Sailfish OS such as the Sailfish OS Fan Club accessible via Telegram (also on Matrix, or good old IRC). If you’re interested in joining communities related to specific locations or in various languages, there’s also the German Sailfish OS Community, the Finnish Sailfish Hackclub Helsinki, the Spanish Grupo de Telegram Sailfish ES, the Italian Jolla Community Italia Club, the Turkish Telegram group, the Chinese Sailfish OS Fan Club and the Russian Sailfish OS Telegram chat group. Please let us know about any we missed and we can give them a mention in the future.

The links go through to the Telegram groups in most cases, but some of these groups do also support other channels such as Matrix or IRC. Check out this list of Awesome Sailfish OS resources to see the rest.

I have to admit my (lack of) language skills prevents me from benefiting from many of these groups, but I can attest to the Sailfish OS Fan Club being a lively place full of nice people and interesting discussion.

A topic aiming to collect together resources for Sailfish OS beginners has now been pinned to the top of the Get Started category. If you’re a beginner and have found a resource to be particularly useful, or an old-hand with a bookmark to a super resource you notice is missing, please post a message there for it to be added to the list. Thanks go to nephros for the initiative.

And don’t forget to join us at the community meeting every other Thursday on IRC. It’s a great place to discuss any of the content you see here, or to share your ideas for future updates. The next meeting will be on the 11th March, full details here.

* May not be unbiassed opinion

Here are 4 new and interesting apps. Try them out at Jolla Harbour… wait… 3 not? Ok, told you: harbour is borked…

Thanks @Mister_Magister, it’ll get a mention, we just need to get the timing right.