In Chum, Waydroid is indicated as console (CLI) application. Will it work after simple installation and enable the phone to run Android apps or will I have to do something on the CLI to make it run ?

Shall I deinstall Aliendalvik before installing Wavdroid? Are both compatible one with the other, installed on the same phone, or can this cause interferences?

Is there something special or not obvious I should take care of ?

Waydroid is primarily for users of SailfishOS community ports, which have no license for AlienDalvik.

Do expect less integration into SailfishOS.

Waydroid is created and developed independent of SFOS; someone(s) took it on themselves to port it to SFOS, primarily intended for those without AD. Doesn’t seem like much of any reason to use both. If you have AD, you’re better off as far as stability, but if you’re into tinkering/hacking, you might like to mess around with it. There’s a lot of activity and development with Waydroid atm, so could be some interesting things that closed-source AD might not have.

I think current Waydroid is Lineage 17 (Android 10) base… Not sure about AD, since I haven’t used it for a year or so.

You can read README in open-sailfish Waydroid Github page for info/explanation about how to install, and differences between packages, etc… 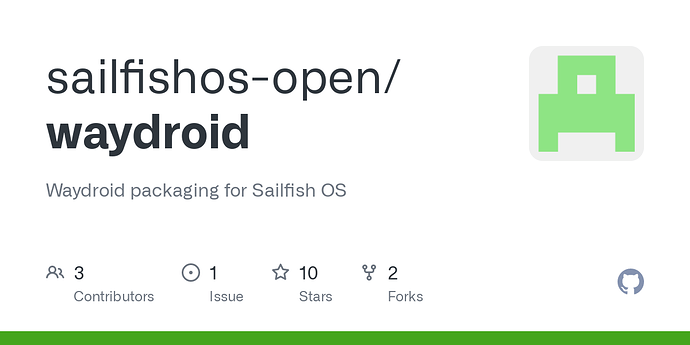 Waydroid packaging for Sailfish OS. Contribute to sailfishos-open/waydroid development by creating an account on GitHub.

Thanks very much @olf and @Levone1 , meanwhile my needed app runs with AD without problems. I was in doubt because Waydroid claims to support Android 10 and AD (I read somewhere) only Android 4.4 . But my needed app (Banking app) works well and so I better stay on the safe side.

I think only the Jolla 1 is stuck at Android 4.4. All later phones are much more up to date with the SFOS version of Android. My XA2 on Sailfish X version 4.3 provides Android 10.

The Tablet, Jolla C and Xperia X are also stuck on Android 4.4, the kernel version they run is simply too old to support the newer Jolla AppSupport, or Waydroid for that matter. @Seven.of.nine You would definitely notice if that was what you were running, because it’s definitely not great nowadays.

The AlienDalvik on the Xperia X, Jolla C / Intex Aquafish and Jolla Tablet is based on AOSP 4.4.4 (API level 19).

These two AlienDavik versions for SailfishOS were developed in cooperation with the Swiss company Myriad Group, the original developer of AlienDalvik. Even though Jolla seems to have done most of the integration work (clipboard, intents, notifications etc.) back then.

Then the Myriad Group stopped developing AlienDalvik and Jolla bought the rights to continue its development.

P.S.: In contrast to the closed-source AlienDalvik, Waydroid (as its predecessor Anbox) are FLOSS community projects.

All well and good, but the fact is that the XperiaX owners were left in the lurch wrt Alien Dalvik.

The good news is that I discovered that my NAS tools work on API L19 so all is not lost, just yet

Why is it so hard to upgrade the X version to a later kernel version?

Disclaimer: I have always disliked Un*x

I don’t think it’s that hard, but what’s hard is to find the person who knows how to do it that is interested in doing it… Any of us could probably figure it out eventually, but what would take me weeks of tinkering late at night and dozens of Telegram messages, someone else could do in half an hour in the background while playing a video game - but they aren’t interested in it…

I seem to recall the X has Android 9 as an available option, so the blobs (?) for later Android versions exist

Because it would take a great deal of effort which Jolla cannot justify.

Waydroid should be an option for the older devices then…

But it isn’t. It has similar, if not the same, problem with supporting ancient kernels.
(As per previous discussion).

Mh. Then a community port based on a more recent kernel remains the only option. Or spending some money on a more recent device…
I’m quite happy having changed to the Xperia 10ii. It’s not that particular expensive.

And in example, what apps are working/not working in WD?

Not using android app till now:
I barely need them but most, I really can’t figure at what point they can get/send data from my device.

There is PostmarketOS based on Kernel 4.9 available for the Xperia X (Sony Xperia X (sony-suzu) - postmarketOS), so it shouldn’t be too much a deal to run Waydroid on this device as well.
Only thing necessary is swapping the Android/libhybris-backend against PostmarketOS.
Does the SailfishOS frontend run on PostmarketOS or would it be necessary to use e.g. Plasma Mobile then?

Currently, I’m quite sure that Sailfish’s UI has not been ported to postmarketOS.