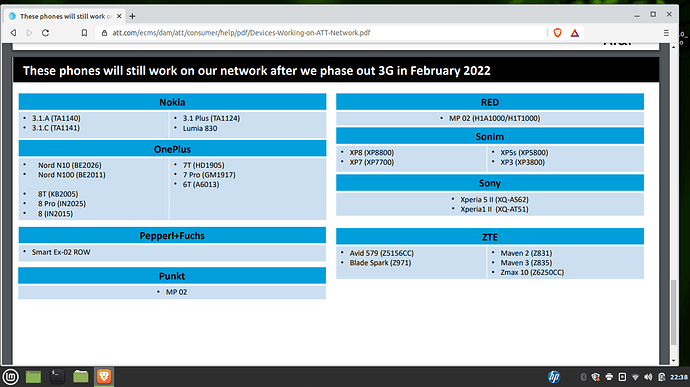 Since AT&T (and presumably it’s MVNOs) will be using a whitelist, it does not look as if the Xperia 10, XA2, or X devices will be permitted to access the AT&T network after the switch even if they are running android.

I would stay with T-mobile and hope Jolla enables VoLTE support…and if not go with the TextFree + Data Sim solution I mentioned earlier.

what makes you think they will be using a whitelist? that image seems to convey only that those phones will still work as a matter of technology, not bureaucracy. i could be wrong tho, just asking

(that is, i think xperia x isnt on there because the version of android it came with didnt support volte, and wasnt added by sony until later, or something similar)

I was able to use an Xperia 10 on T-Mobile a couple weeks ago but haven’t tried it since. Just talked to someone that said they tried Sailfish X (free edition) today with Mint Mobile (T-Mobile MVNO) and it didn’t work.

Guess I’ll have to wait for my Punkt MP-02 to arrive and hope they get their VoLTE support for T-Mobile straightened out.

afaik, neither tmobile nor at&t restrict based on device type, although NEITHER is configured correctly by default for APN/MMS, on any device (which makes sense since jolla doesnt test on or care about USA carriers). if your device supports the bandwidth, it will work on at&t and tmobile for 2G/3G/LTE…until next year when it will be data-only on LTE.

imo, VoLTE support is extremely unlikely on either tmobile or at&t, because even if jolla decides to give it to rostelecom, it will require someone porting it to usa carriers (its apparently not trivial to make VoLTE work for one telecom, even if its working for another)

(EDIT: i know for a fact that at&t and tmobile both work on SFOS on Xperia X Compact as of now, for 3G and 4G, because i tested it on T-Mobile this morning, and on at&t a few weeks ago. highspeed data @8mbps+, calls/texts, MMS, all work. i am on Long Island, NY, USA)

From the article: “There are many non-carrier handsets that don’t work with AT&T’s HD Voice service. Hopefully, the carrier will whitelist those handsets in the future so that its customers could continue using them beyond February 2022.”

My suspicion is that AT&T is using this as an excuse to simultaneously force users to upgrade and drastically cut back BYOD on their network… with perhaps the additional “benefit” of increasing the number of handsets on the network with user monitoring software to spy on their user base.

As far as T mobile their shutdown date has been extended to October and they haven’t announced a whitelist so presumably BYOD will still be allowed.

so yea, apparently there really is a VoLTE whitelist on AT&T that forcibly stops VoLTE from working on non-branded phones, including on carrier-unlocked devices that they DO support. folks have had success by contacting an agent with a specific request to enable VoLTE, and asking them to manually register their IMEI.

i can confirm that this is not the case for tmobile, or at least that the xperia x, xa2, and x compact all work on VoLTE on sony android and on lineageos.

I was forced to register my IEMI for my SIM

Link to Thread on Pinephone Forum

A Cricket customer reporting that his Pinephone 64 was banned from Cricket (an AT&T MVNO) this week because it wasn’t on the VoLTE whitelist.

This is probably a clear shot across the bow for all sailfish users to switch to T-Mobile or one of the Data sim only options like USMobile.

Some topics were raised during the last meeting and its nice i think to put some of them here also:

there is not much documentation around VoLTE

I guess this means the modem interface and the configuration that is needed, not VoLTE itself. The specs are openly available, and patents licenced. I still assume the entire stack will be modem-side, and it is “only” really config/management on the SFOS side that needs to be done. I mean, how else would certification of modems work?

It sounded like it was known basically what steps were needed, but details in achieving them was the issue. Something i assumed means AT commands are not enough, so qmi magic needs to happen, and that is not documented in the open. I did a cursory look at what pinephone needed for VoLTE, and that was basically just setting a profile and registering for IMS services. Some other phone needed to flip some feature settings and then do pretty much the same. Neither was a perfect match for the Qualcomm/Sony setup.

It would be pretty cool of Jolla shared what is known, and where the gaps are.

There’s an unofficial build of SFOS out there…

I wonder if Jolla ever sees any of these…