I can’t get the app to connect with the camera.

Has anyone got it to work?

I know next to nothing about the inner workings of SFOS so this may be naive, but it looks like the app needs a permission to access the wifi. Is there a way to grant it to it?

The goal is to use the phone as a remote controller for the camera. 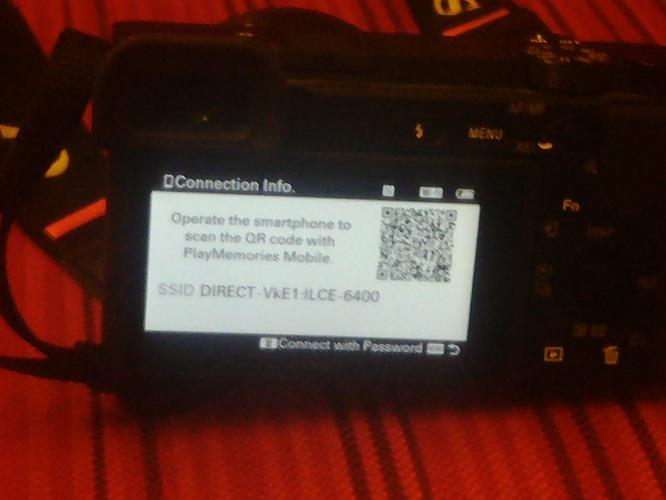 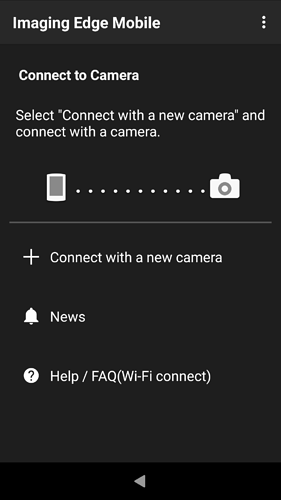 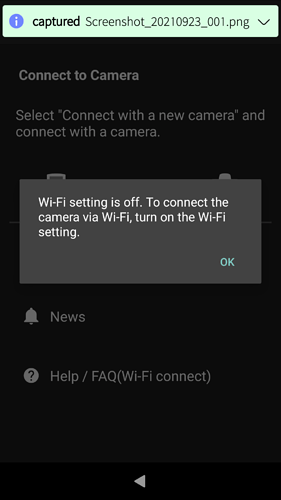 This is a known limitation since forever. The Android runtime cannot access/control certain low-level APIs, like WiFi, Bluetooth, NFC, VPN etc. I suspect this isn’t easily solved, if at all feasible.

Depending on how the app works you can still connect to the WiFi network manually and it might work.

Hmm, it’s not on the list, but both 6300 and 6500 seems to have an open API so you could perhaps make a native app.
Seems to be shifting in terms and format, but none the less.

6300, 6500 belong to an older generation. 6400, 6600 are a refresh. I’m skeptical about Sony keeping the interface on the even-numbered models. Also worth mentioning, the API page you linked to includes this text:

And the list of devices supported by the new SDK is woefully short:

I may or may not get to exploring both SDKs at some point, though I hoped to take pictures, not pick up balls dropped by Jolla.

You don’t think if it’d been that easy to implement, they wouldn’t have already done it long ago? Aliendalvik is pretty much their most important asset to outsiders, and may well become their primary focus in the future.

At least for transferring pictures from the camera to SFOS it works with Bubble Upnp.
But I was thinking lately about looking into making a native app for it. Donnie can already show/list the pictures, so a fork would ‘only’ have to implement downloading.
This wouldn’t help for remote control, though.

Aliendalvik is pretty much their most important asset to outsiders

If that was the case and the support for Android apps is this lacking (add in-app payments to the list of things that don’t work in Android apps), they’re screwed.

I wouldn’t be this annoyed if they were honest about the limits. Instead they claim in App Support - Jolla :

AppSupport for Linux Platforms gives any embedded Linux-compatible platform capability to run Android apps. With AppSupport the apps can be run on a wide variety of devices like smartphones, tablets, automotive solutions, wearables and other embedded devices. The application performance and user experience on Jolla’s solution is on par with native Android OS.

Honestly, I have no idea what they’re doing. As in, it seems they’re not doing much. I’m pretty sure they’re doing something, but it’s not visible to me.

The basic utilities in SFOS are so rudimentary they look like weekend projects:

The rest of the software things I like about the phone are made outside Jolla.

i can’t figure out a reliable way to zoom in the text I’m typing to move the caret, it tends to select the word instead

Tap where the cursor is (or just tap twice) and start dragging your finger.

Sounds like a bug with synced vs local contacts, which is worth reporting if no one else has reported it yet.

Yes, this is obviously Jolla’s fault and has absolutely nothing to do with Google’s monopoly position.

Thanks for that! This loops back to my complaint about the SFOS’ Human Interface Guidelines: most apps I use daily have Settings in their pulldown menu. This has trained me to look for such in the Phone and People apps too. That, plus the fact that it’s kinda logical it would be there: if I’m looking to change the contact list presentation, it’s likely I’m looking at it. Instead, I have to leave the app, start another one, look for the desired icon in the grid which is multiple screenfuls long, populated mostly by chaff, and which has no obvious ordering or text search (typing this made me look at it once more and I figured the order out; it’s so not-useful it’s adorable). So yeah, I’m aware of the Apps tab in Settings, but I basically ignore it. Back to SailfishOS UI redesign patch - #18 by ApB I guess.

i can’t figure out a reliable way to zoom in the text I’m typing to move the caret, it tends to select the word instead

Tap where the cursor is (or just tap twice) and start dragging your finger.

So right now I did this successfully 2 times out of 25. Technically 3 but since I’m not used to double-tap-and-hold I lifted the finger and the text zoomed out immediately. I believe this was easier to do when I installed SFOS a few weeks ago (there were some OTA updates since then). I’m on 4.2.0.21.

But that’s all beside the point. The point is: where’s the manual? Do you really expect every Jolla customer to spend days of reading forum posts with titles like “SailfishOS UI redesign patch” or “Ideas for polishing / evolving Sailfish 4” to find out that apps can be closed by swiping from a top corner? I just sat through the painfully slow tutorial and it covers neither. Why?

Ah yes, “tap twice” is the wrong thing to do. Don’t tap. Put the finger on the caret and drag it with the finger to the desired place.

Wow, this went off-topic quickly.
Either you at lest try and understand that letting the guest OS have free reign over management interfaces for things that are handled by the actual OS (and handled differently at that) isn’t exactly trivial. Or you choose not to. In the latter case maybe you should just use Android and become the product.
Don’t even get me started on payments; they are handled by google for pete’s sake!

I never claimed that bridging the networking subsystem between aliendalvik and sfos was trivial. It is Jolla who claims my user experience would be “on par with native Android OS”. I paid 50 Euro for a SFOS licence, you know?

But I agree that this is off-topic, and I’d rather be picking up balls dropped by corporations small and large than engage corporate apologists.

Poor Jolla, exposing the wifi to dalvik is too hawd, but I

I don’t know what you two think you are doing, but you’re certainly not helping Jolla’s image. Just stop.

Can you elaborate on the Bubble uPnP solution?

I’ve managed successfully to use Camoodoo for remote operation with my Sony Nex-5R but I can’t use that to transfer other pictures than the ones I’ve shot using the app.

This might be dependent on the camera model. I have a Sony A5100, which is capable of selecting some or all images on the camera itself and share them via Wifi.
Once, the Wifi is up, I connect my Sailfish phone with that Wifi network, start Bubble uPnP, the camera gets recognized and the images show up and can be downloaded.

Well that was straightforward, thank you for the information! Not the most elegant app for this but it seems to work quite nicely. Thank you once again!