I was trying out the VPN feature of SailfishOS (4.1.0.23). The used VPN is enabled for ipv4 and ipv6. However when checking via ipleak.net I see that only the ipv4-IP goes through the VPN but not the ipv6-IP. Here the one of my mobile provider is detected. Also the DNS is leaking. My mobile provider is Vodafone Germany which has switched to ipv6 a year ago. But the same also happens if I use Sailfish VPN in a Wifi.
If I change the mobile network protocol in Sailfish settings from “dual” to “IP”, the ipv6 seems getting blocked by the phone and consequently ipleak.net doesn’t detect a ipv6-IP anymore. The DNS leak persists however. Checked on Brave browser (chromium based) and the native browser.
Using the same VPN on my PC everything is fine and works as expected, so I kinda blame the phone here.

I am no expert on all this, so maybe some of you can help out. Does Sailfish not facilitate ipv6 VPN usage? How can I avoid the DNS leaks? Do I choose the wrong settings?

Asking again, sorry for spam. I guess this is serious if the Sailfish VPN is leaking information.

So ipv6 works trough the VPN or other platforms, or do they just block it when connected?
There is a big stack of commits that seems to deal with blocking ipv6 for this reason on Aug 27 and before… 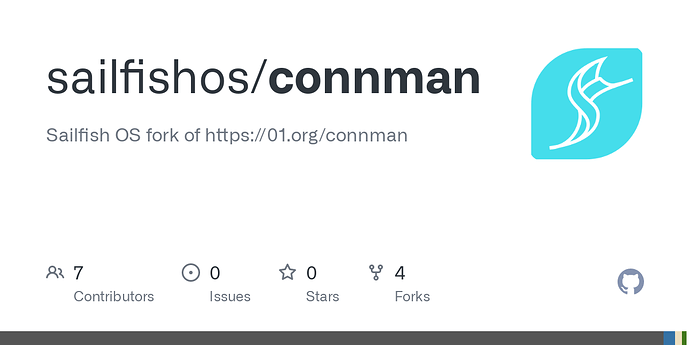 Sailfish OS fork of https://01.org/connman. Contribute to sailfishos/connman development by creating an account on GitHub.

@jlaakkonen is this one of the fixed problems?
4.2 is already branched out, so is guess that means it is slated for 4.3…

Um. Ipleak is not really a reliable way to determine, well, anything. What is the question?

I, for my part, only use static ipv4, and tunnel ipv6 on a dedicated link. So, my ipv4 (from the telecom), I use to connect to a proxy server (that I control), which, in turn, has multiple vpn providers connected to give my ip ‘from coast to coast’. Sadly, I no longer have a server parked at mae west.

In any case, my phone, when connected using 4g, will never be anonymous. Except when using wlan at home. Using a vpn feature on a telephone that is NOT using wifi, is not anonymous.

vpn on a phone is silly.

I don’t understand your point. If Sailfish offers a VPN functionality it should work as expected. Ipleak seems to see my IP despite having a VPN connection activated which indicates that the Sailfish VPN is errorneous. Happens in 4G connection as well as in Wifi connection. The arising questions were clearly stated at the end of the opening post.

Sorry. It was ‘too many questions’. I don’t know of a vpn provider that does ‘dual stack’, in a way that I would trust. But I’m probably ignorant.

So, is the question… ‘Under what circumstances can one securely use ‘A’ vpn service on Sailfish’?

There are also a number of VPN types listed in SFOS:
L2TP
OpenConnect
OpenVPN
PPTP
VPNC

all of which have different characteristics. Could you please specify:

EDIT, just looking on the old jolla Forum there was a mention of disabling ipv6 to get rid of dns queries leaks. VPN client [closed] - together.jolla.com

So, openVPN works as advertised . Please supply some details of your setup.

vpn on a phone is silly.

Well, since it is well known that even Tor traffic is being de-anonymized by Chinese DPI and that ‘at least’ the US and probably also the UK have similar level’s of intrusion AND the area where law enforcement is getting ever more traction (it is legal in the UK and Germany to install trojans, as just one example) … I don’t see the point of ‘hiding’ my IP. I see a dire need for political action. And I fear it is too late, when we see the EU, in lock step with apple, going in the direction of MANDATING spy ware/back doors.

In the main, I’m very distrustful of the ‘appearance’ of security. And I see a lot of people are liable to fall for ‘snake oil’ salesmen.

I do use vpns, just not on clients. I rent servers (also have some donated gear/bandwidth in the states) and use those to proxy where I feel it’s necessary. Even though I have more control here then you do with a vpn ‘service’, there are lot’s of weak links.

I don’t use Tor anymore because I’M the weak link.

EDIT: Although it’s secondary, I’m also just not so sure about the protocols. I’ve been doing X forwarding over SSH since the 1990s to get around Geo blocks, so I’m also just a bit other qualified.

I fully agree, VPN is not a save data communication. I use it only for simple purposes:

Yes there are a lot of commits regarding that case to allow disabling of IPv6 when VPN is connected. Most of the VPN plugins in ConnMan do support only IPv4 (OpenConnect supports both whereas the most used OpenVPN does only IPv4 networking). This is not a system forced feature but comes from an option in the advanced settings of VPNs.

Unfortunately the options in the UI come in 4.3.0 whereas the implementation to ConnMan comes in 4.2.0. Each VPN has a type specific setting as most of the VPNs do support disabling of IPv6 (OpenVPN in 2.5.x, which is coming also in 4.3.0). Therefore the feature is implemented to support these options to inform ConnMan about IPv6 use properly.

The actual cause here was that when IPv4 only VPN was enabled over a IPv6 supporting transport and being how the networks and ConnMan operate the DNS query was also sent to the DNS of the transport medium, which in this case can respond back with an IPv6 address for an hostname. If there is an IPv6 address available for the hostname it will get preferred over IPv4 thus, data is leaked bypassing VPN connection. There was an attempt to fix this by filtering DNS queries (there is a WIP branch in git) but this deemed to be more feasible approach as of now. If you have a IPV4 only VPN then the traffic should not be let to traverse to other networks if the VPN is set as a default route in the settings.

This is a difficult issue as people may have different needs and quite personal setups so we decided to have that option as user selectable one. Maybe it could be considered as enabled for all VPNs by default when it has been given some more testing with 4.3.0 and changed to utilize undefined routes to IPv6 when the feature is enabled instead of relying on disabling IPv6 (disable_ipv6 = 1 and autoconf = 0 in /proc/sys/net/ipv6/conf) for the connected networking interfaces.

I just wanted to note that the IPv4 and IPv6 dual stack worked with version 3.4 of SFOS using openVPN … I wasn’t expecting it to, but it did.

So, maybe a regression thing? Or am I missing something?