Is the community still interested in a 4:3 native tablet?

I remember how dissapointed I was seeing the fate of the youyota tablet. What a waste.

With community ports and sailfish on x86_64 getting more usable, would trying to transparently crowdfund a tablet in collaboration with Jolla (for licensing. Because, lets be honest.) be worth it? I havent seen any news of a tablet in the works for years and I was wondering if this was why. I wish they’d just pick up one of the xperia tablets since I pretty much associate sfos with Xperia now. Miss my XA2 so much.

Crowdfunding a tablet with/ for jolla? How many people would be interested after the results of the previous attempt?

The Jolla tablet was - even is - great. The problems were purely economic problems. A port of SFOS for some tablet would be less risky (economically) but the effort required for HW adaptation might be too high regarding the low interest in tablets in general.

A tablet would make sense if it could be used in a productive way. If it was a SFOS tablet, we would need native apps for being productive, i.e. an office suit like Calligra.

While I would like to have such tablet, I am afraid it is not feasible for Jolla and the community.

I reckon the problem was a general lack of transparency.

I feel like if someone were to start a project where every step was planned and the people who helped fund it even got a say in the next step, components, software direction, etc, it could be a lot better.

Im talking transparency down to "this is a list of hardware proposed, here is a pending patent diagram, here are some supploers we are considering (do our donors approve?), here are some emails, we are making a port and negotiating with jolla about licensed software, negotiation fell through now were using a portion of your money to pay a 25yo to scale office apps while so and so ports waydroid, etc etc.

You could do these things through poles. What bothered me about past projects was that they were black boxes. I think with an element of honest transparency, it could work out pretty well. And if a smooth tablet with office apps and aliendalvik hit north america that would be awesome even if no profit was made and the OEM just broke even. Just to test the waters that would be neat.

I am not interested in another thread discussing past failures.

Why not port SFOS for the Raspberry PI?

edit: one can connect a touchscreen to the Raspi and screw together to have a tablet or use a normal screen, mouse/touchpad and keyboard and be creative as wanted.

I’d like one as long as its not a half assed attempt. That means fast cameras, mouse, keyboard and flawless pen support.

I’m a lucky one and have a Jolla Tablet. But why not?!
But the real thing I wanna have is a Jolla Phone 3.
Even it’s a collaboration not a self made phone. Sailfish X is good and also community ports are. But Sailfish out of the Box would be great.

I am interested in a tablet with the official SailfishOS, with Android support.

Luckily that is not what this thread is about. 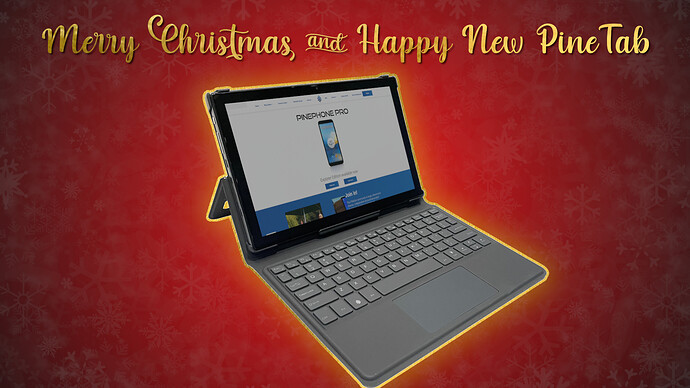 Merry Christmas, happy holidays and a Happy New Year to you all. This month’s update has a different formula from the usual – aside from the announcement of the PineTab2, most of this month’s content…

PineTab2 should be out sometime after chinese new year. Maybe if a port works well enough some official deal with Jolla can be arranged to make a Jolla branded batch and/or have official support? Even if not this could partly solve the problem of scale you normally have with small production runs leading to a unreasonably high price.

Mali graphics make anyone a dull boy. Not to mention Allwinner.

I don’t get excited for Pine devices any more. In terms of a community port, yes there is that and waydroid. But what I want to plan for is a natively supported tablet with aliendalvik, exchange, xt9, etc.

I’m sick of filling in gaps. If 1,000 people wanted a native tablet, were willing to gamble 200 USD on a limited production run to test the waters, and gather for attention from Jolla, they should expect a budget intel based tablet or budget snapdragon tablet. And, if Jolla won’t even jump at paid licensing, I’m jumping ship for good. For the past five years I have slowly lost excitement with a company that appears allergic to money and has eroded an OS that I think peaked at 2.0 (in terms of UI).

Sorry. I hear “port it to X tablet” and I get frustrated. That’s happening, the Z3 compact tablet port was solid. The s6 tablet port looks solid. That’s not what a lot of people want. A well built, natively supported tablet, readily available in North America, with production apps and android app support to fill in the never ending void left by the Jolla app store, would be nice. I’d like to see someone try to make something that isn’t just for enthusiasts, because as one myself, it gets annoying having two of each device like a dealer because of the lack of a marketable OEM and the demands of day to day life in a digital world. It’s either “compromise on a port device largely abandoned by Jolla, or get an Xperia phone.” that isn’t fair, and I’d like to see a transparent crowdfunded device test Jolla’s motivations.

Considering the last (tragic) run, i doubt 1000 tablets will cut it.

The youyota thingy was a double blow to the credibility of sailfishos for many reasons, not only production costs.
That said, if there would be a linux-style tablet available, say built on top of upstream code only, debian style, that anyone can basically handle independently - think of it as a tabletpi - i might think about it.

crying shame that sony haven’t jumped on the recent tablet re-run bandwagon with something that ends up in their open devices program.

Today Elon Musk blocked Twitter client apps, except Piepmatz on Sailfish. I use Tweetbot on my old ipad mini and Piepmatz on my Salifish device. Now I cannot share anything from my ipad to Tweetbot/twitter. Wit screenshots, send to Telegram (a temporary cloud) I can share via Fernschreiber an article on Piepmatz. This is not an ideal route and I don’t like doing everything on such a small screen.
I really wished there was a tablet with Sailfish.