GPS functionality is very important to me. I am happy to help and do some experimenting.

Today I made an express test. Took a walk with an Xepria X (daily driver) and an XA2 (test device) on the palm o my left hand and a camera in the right hand to take photos as GPS changed status. GPS settings custom (BTW, in settings in location it is called “custom settings”, there in “Advanced settings”, hmmm…) “on,on,on”. SFOS 4.3.0.12, MLS from Jolla installed.
Recent GPS history: XA2 didn’t see any satelite for the last 2 weeks, the X, as it is my daily driver, had a fix at least a couple of days ago. Location is allways on (both).
GPSinfo is off, Pure Maps and Kuri on. Used Kuri to monitor GPS satelite fix.

as I said, there are days where I have a fix within 2 minutes and then again days where no fix comes for 1 hour.
The quality of the satellite signals are identical.

Worth to mention that sometimes fix comes with quite poor signal (yellow bars in gpsinfo), sometimes no fix with excellent signal strength.

Same observation here.
And I have to point out, that it is not only the XA2 which has problems. On the Xperia X I have difficulties to get a fix quite often as well. But much worse it is on my Pro1. Even so I know, the Pro1 isn’t officially supported, it seems to be more than just that one device model (XA2) which has massive problems.

Would someone here who can reliably reproduce the problem be willing to test out some changes? You’d need to have an XA2 running latest Sailfish OS 4.3.0, and experience GPS either not working at all or taking a long time (5 mins or more) to get a lock.

I can test stuff. Surprised nobody else is offering after 400 comments…

I just installed 4.3, only used GPS once but I swan around tall buildings in French cities and slow GPS causes a lot of stress.

So, with probably the first time using GPS in a new country, walking, default options but offline, no reset via GPSInfo: 8-13 mins for a connection. This was better than expected (4.1 often took 20 mins when not crashing the module).

Thanks a ton for looking into this.

I can test stuff.

Thank you for the offer! Although it’s not clear from this thread, another user has also kindly offered to help and is running some tests. However, if the need arises, perhaps I can come back to you if more testing turns out to be needed in the future?

Please ask again if you need further guinea pigs. My GPS is usually deactivated so I’d may be ready for an experiment.

Many thanks also @jollajo for the offer. I’m keeping tabs on all the offers and will return to you if the need arises.

Just to say more broadly, it’s great that so many people are willing to help. I can’t make any promises about getting to the bottom of this, and I should make clear that it’s not me doing the work, but without your help it would certainly be much harder.

I noticed a considerable improvement when I switched to GPS only mode. In this case I get a fix within a few minutes. If I enable the other options, it takes forever.

So yesterday was a good GPS day. I was walking with the dog. otherwise the same conditions.
Start from GPS Info and Pure Maps

i have been on the road for one hour and there was no loss of GPS Fix.
Tomorrow I will test it in the car with the same conditions.

I have found GPS to be more reliable in getting a fix within a reasonable time (a minute or two at the most) when you (a) use it regularly, and (b) start off using it the next time from the same place you stopped using it the last time (e.g your house). Then it seems to ‘remember’ where it was, so gets a reasonably quick fix.
However, if you don’t use GPS for a while (so presumably the satellite positioning relative to the phone has changed a lot?), or you start off somwhere remote from where you last used GPS then it seems to get confused and won’t get a fix for literally hours in some cases. I don’t use GPS that much, and when I do its usually because we’ve driven somewhere new and interesting at the weekend to walk doggy. So when we arrive I turn on GPS maybe after a week or two of non use, and at a completely different location to when it was last used, and by thr time we’ve finished the walk over an hour later using OS maps on my wife’s iphone, my SFOS XA2 is still looking for a fix.
I have speculated that those SFOS users who say they have no probs with GPS perhaps use it more regularly and/or in similar locations from one use to the next.

Everybody makes tests since years.
I wonder why GPS tests are so unequal.
I made 2 tests as seriously as possible, 4 x XA2.
No GPS for > 24h before tests, > 36h between tests.

Test 1 is almost ok, test 2 is very bad. Only differences: some clouds and night/day (36h).
Some changes were done in 2 devices between tests, I presume these changes make no difference (can be wrong though), general tendency goes down.

What is surprising is that the phones rank the same in both tests.
The fix vs time curve just shifts but stays the same when it’s cloudy. Each phone seems to keep its characteristics.

Does that mean that it is a HW problem?

We’ve tried to replicate this internally with many different XA2 devices, but unfortunately haven’t been able to. This makes it difficulty to devise a fix.

This hitches my mind.
Some users’ GPS are ok, some have disaster.
Jolla guys can’t reproduce the problems.
If they have test devices not being hurt by a real usage, does that indicate that XA2 get a problem with time/usage? (e.g. dirty/bad antanna contacts)?

Whould there be a hardware improvement? 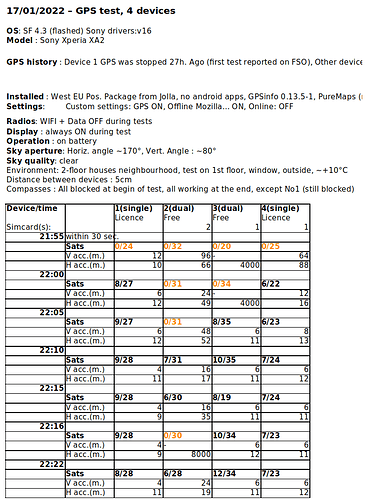 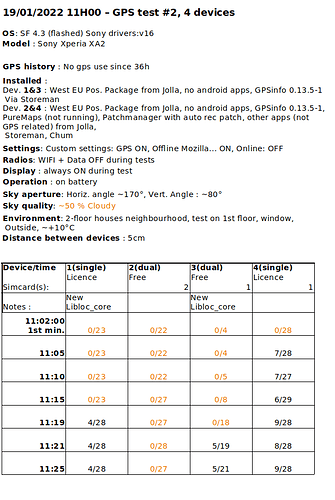 EDIT: correct second image. Would be great being able to upload regular files too!

I would rule out a hardware problem, since all your devices find satellites.
I consider the different number of satellites as normal. If it really should be a bad contact of the antenna, you should see that in the quality of the satellite signals.
but I do not know which app shows that graphically as a bar chart.

I do not know which app shows that graphically as a bar chart.

It’s GPSInfo. You need to swipe “back” from the opening view - it’s a little bit counterintuitive.

Not all GpsInfo have the bars from what I saw.
The GpsInfo by Direct85 does it (Openrepos)

The other one is messwerk. Second button (GNSS Satellites) enables this option.

Thans for the trick.
Not sure to get it tho. Which version shoud (not) be use?

I would not rule out hardware problem. See my post GPS stopped working - #307 by phklrz

It’s becoming hard to resist not dismnling it!
EDIT: I mean to fix it !