Recently, WhatsApp has been rolling a new feature of their WhatsApp Web interface, allowing multiple (up to 4) devices accessing it at the same, even while the phone’s WhatsApp is offline. I.e. it is now possible to (at least) send and receive messages and attachment without need an Android running.

(and this also means, ((as soon as Sailfish’ native browser is mature enough)), it should be possible to have WhatsApp on a Sailfish phone without Aliendalvik being turned on).

There are now projects on GitHub, such as tulir’s WhatsMeow which have been adapted to this new multi-device API.

This means there would be hope again for native WhatsApp support on Sailfish OS:

So, will there be an app dev crazy enough (and with enough free time) to try yet-another-native-whatsapp attempt?

(Of course, as usual with WhatsApp development: beware of number bans)

On a side note (rather for information): Threema has announced multi device capability as well, also for linux desktops. This opens the same opportunity for a native app as @DrYak suggests for WhatsApp here. Sorry for the slight off-topic

WhatsApp? Just after last privacy changes, that is no privacy? Go android :). This way live is much easier :).

I agree that Meta’s products in general are despicable. But not all my friends have switched to Signal/OpenWhisper during the fallout so I still need that crap to communicate with the remaining ones.

At least getting rid of the closed-source android step would be a tiny step in the less-wrong direction, even if in a perfect world, everybody should be using some open-standard of federated messaging (like matrix).

More reminder to self, but perhaps a straight web / qml+js approach: https://github.com/adiwajshing/Baileys Question to self. Probably less work that the go route.

I’m using Element ONE since a week or so:

Element One | All messages in the Element App

Bring your WhatsApp, Signal and Telegram chats into Element. It’s Element, hosted and bridged, for speed and ease.

It provides bridges to Whatsapp, Signal and Telegram (other bridges are available may be included in the future). I’m using the WA bridge and since today it is also supports the new web beta and the WA app does not need to run in the background. For me it works perfectly.
So i would love to see more development towards an open matrix client for sailfish (Sailtrix is awesome but still lacking lots of features).

I wonder if wrapping the hosted element-one app in a WebView would be a good idea. I’m just wondering out loud. If no one has tried yet, maybe I will. On the other hand, I believe it requires web assembly that we probably don’t have access to. Anyone wiser than I?

There is also Franz, but up to now its just for Desktop use: 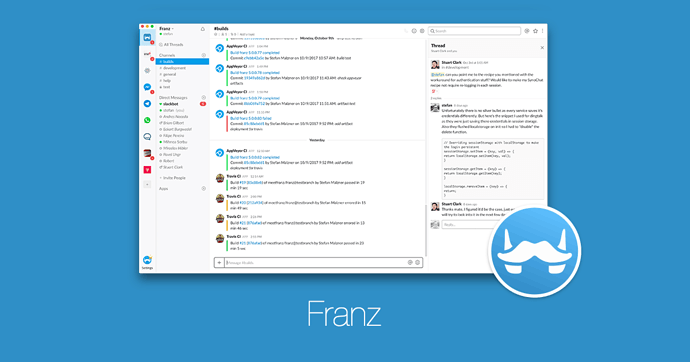 whatsapp web works on sfos4.4.0. The scaling is a bit crappy and calling isn’t possible but it’s a start

not all my friends have switched to Signal/OpenWhisper during the fallout so I still need that crap to communicate with the remaining ones.

Why? I also have friends without signal. We use phonecalls, or use SMS. There is an option that doesn’t force you, nor your friends, to use apps they don’t want to install. Every phone is capable of sending and receiving calls and sms.
An other option is e-mail. It supports file attachments and group messaging.
I understand your friends won’t like or make it easy to switch communication methods. Every person dislikes change by nature. Sucks to be them, but they should be able to accept giving up privacy to empower big cooperation to influence you is not something you should accept.
Unless you don’t care enough to use whatsapp because it is easy.

It’s a bit of a hassle to interact with whatsapp groups through email or sms, unfortunately

Yes, it is a very good idea, but it costs a lot of money per year

Setting up your own matrix server shouldn’t be a big deal. There are matrix bridges available for nearly all messengers on the market. It’s possible to be run whatsapp on the same matrix server in an android container and connect the matrix bridge then.

There is an unofficial open-source client based on python: https://github.com/rafatosta/zapzap

All that’s missing is someone adapting for Sailfish.

You obviously don’t have to deal with a dozen Soccer moms.

I have to admit, I only use signal, but my GF pays for it in being the one that EVERYONE goes to. And, yeah, everyone HAS my phonenumber. But they don’t use it. If I send an SMS, it’s always the LAST thing they see. Because they are constantly being bombarded by wtfapp.

The inertia of a HERD of people starting whatsapp groups should not be underestimated. And I’m seriously (because it’s not fair to my GF) considering having one device (secondary) with that crap running just so I’m not leaving somone (the special someone) in the lurch.

I REALLY hate this state of affairs, but no one (school circle, sports, casual acquaintance) cares. And, believe me, I’ve even gotten people to add signal … sadly, they then try phone calls via signal which don’t work on sfos.

And reminder to self again: https://github.com/adiwajshing/Baileys

Does anyone have any experience with Baileys? It has over 38K users on the hub of evil.

But is it possible to open audio messages? This drives me nuts, but half the people that generally contact my GF leave short, irritating voice messages.

Not yet. The oldest is 3yo.
My wife also doesn’t use whatsapp. My family in law is very close, so they all use signal primarily because of us. My family is too big to be really close with, but my nearest family (parents, siblings), all but my father switched. And I don’t care. I call him, text him, of I just visit them.
Most of my friends were on signal as well as whatsapp, others started using both for me. I have some friends who didn’t switch. Some I talk to less often. Some others I play DnD with refuse to switch, but I see them every week.
So yeah, the problems with switching were very minor for me. And I didn’t experience much of the inertia. If you say there is, I’ll take it as true, I could just be lucky. Still, a litte bit of encouragement will do more good than harm, I think. Also, people refusing to just install a single app for me, I can understand, but then they shouldn’t demand the same from me as well. Some of the inertia shouldn’t have to be accepted.
If your GF is bothered by all messages, you are not guilty of that. Your GF uses an app, and her contacts do. You don’t have anything to do with that. If she deletes whatsapp, those messages will stop, or more likely and better, become fewer. I’ll take it from you it isn’t as easy as it was for me, but I also refuse to forget that side of the coin.

Here’s just one case example from my life. An airline representative found a typo in a very important paper during my check-in and refused to board me. I managed to issue a new paper and download it,but I had to print it. And the info kiosk with the printing service accepted files only through whatsapp. Probably, in theory, by explaining my situation I could convince the girl there to accept my file over email or Bluetooth, but that would cost me extra nerves while I was 20 min before check-in closed. I then just THANKED GOD that I had a normal phone with me, which I had to have anyways because during the quarantine the immigration country required installation of proprietary apps.

You certainly underestimate how much integrated into society those proprietary solutions are these days. And saying you don’t need something doesn’t mean others do not need it neither. The freedom implies choice. You have a choice not to install Meta products, and I have a choice to install. Otherwise it’s not freedom, it’s self-sandboxing with an illusion of being free by choice.

Thats interesting, as it would mean that there is a whatsapp API still open to third parties.

(Or was it a person with a phone behind the kiosk…?