If you use the search on the foreca website (foreca.com) there are many locations that are not available on the device search.

What stops these locations from appearing when searching on the phone?

Good point, there are also a fair number of duplicate locations.

I am uncertain whether this is the right thread or the duplication locations thread is correct, and I only just noticed this issue, so do not in which version it first appeared.

Because I’ve upgraded my phone and have not moved, my weather location is fine. But I am reflashing my wife’s phone and when selecting our town of Plainfield, there are three in the U.S. and the state is not listed. It used to be. I would see Plainfield, Illinois, United States, Plainfield, Indiana and Plainfield, New Jersey.

I had to select all three and find the current temperature that matched the display on my phone.

If this is something that would benefit other users, please consider restoring this additional detail. If it’s just a U.S. thing, then I understand we’re not a target market and I will live through it.

I had never been able to use the weather app since it doesn’t show my location (or any close area). Doesn’t matter how many different ways/order/wording I try. As the auther of this topic already stated, going to foreca’s website, one can find any searched location. The same one, wouldn’t be found on Jolla’s app.

@jovirkku I have read somewhere at TJC (someone from Jolla said it), that Jolla doesnt alter the availability of data in anyway(Foreca’s), so it’s either there or not. So, where do our problem lie? Jolla’s side or Foreica’s ? It’s really frustrating. Sorry for @ you, but any info on this subject would be appreciated
edit: Maybe adding an option to search by current location(GPS) would be best, eitherway?
edit2: found this : 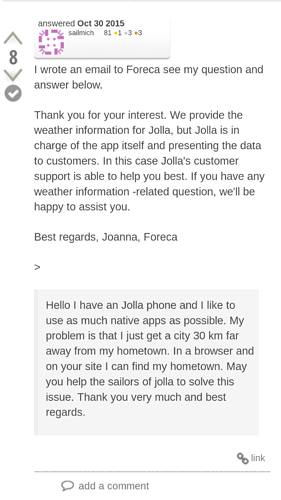 I just did a test with /usr/share/sailfish-weather/pages/LocationSearchPage.qml

Searched for Plainfield and see the list with states:
NJ
IN
IL
CT

There is some repetition in the list which suggests the ‘state’ filtering is a bit fuggy. But the data is available.

Is there a Plainfield in PA, OH ?

EDIT: I’m guessing the problem has to do with definitions of State, Province, Jurisdiction?

The state thing could be a patchmanger thing.

So as I understand (with my basic knowledge), and since its a .qml, this just adds the ability to show states as well (which are already there but not shown)? Sorry my friend but explaining, the purpose of your attempt is much appreciated

I’m guessing the problem has to do with definitions of State, Province, Jurisdiction?

I pretty much, had the same collection/ speculation . But it then seemed, a bit more complicated… with this test/observation:
Maybe this is much unnecessary info, so my apologies for rambling on

Just to give an exact idea of the actual deal here:

I live in Lebanon. Lebanon is divided into 8 Governorates. The Governorate (Muhafazah) is considered an administrative division of the country. It is generally divided into Districts (Qada’a). Only Beirut (Capital) has no division.
Each district consists of at least several cities and/or villages.

Searching for a certain Governorate, District or even city, neither separately nor combined, has worked out.(Except for a few…

Lebanon has NO States, Provinces, or any other labels or greater area divisions.
Naturally, after failing to find a city/area, one would start testing/searching, with the biggest division/state…(Governorate in my case), adding districts and areas subsequently. Unfortunately, never worked either.(trying with countless different ways and spelling)
Somehow I got here while testing…

Surprisingly… Turns out…only areas/locations from within this list are actually searchable and could be found using our app! The list consists of some few well-known (Not the best/most known, however) Governorates, Districts, Cities and Villages combined.
SO. why exactly and only those included in this list, are available to our app??
What about other countries?
Doesn’t Jolla have access to the whole data base?

these are cities, aren’t they. I’ll test Sidon and Tripoli (Beirut!) … Nice to see sailfish in the Levanent! Without reverse engineering the model, I’m stuck with the fields in QML.

Ok, there is no state information for Lebanon. The same is true of the town of my birth, Apolo, Bolivia. The province is not shown.