Recently I’ve been slowly phaseing out from SFOS. I got two devices and I’ll stay with one of them just for fun.

Anyway on my Xperia 10 II I have 134 contacts. Up until this time on my XA2 i had 0 (Fresh reset).
So I exported contacts to a file from 10 II and imported them on my XA2. You know what? Now I have over 600 contacts of which over 400 are not mine!!! They had numers and names. When I try to delete them all it only removes 134 contacts of mine but all of those forein contacts cannot be removed? I have no synchronization, not logged into any account but Jolla. I Also cannot delete them contact by contact cause options edit and remove aren’t available.

Did you face something similar? How to do something

These contacts are completely unknown to you? Did you maybe recycle an old SIM?

No they are not, I checked them all. No one of them is mine. No sim recycled, after reset no sim where inserted. Also What I noticed all of those contacts have white font in contacts app, but mine are greyish, see: 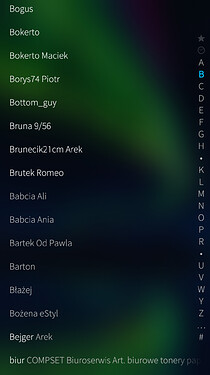 Those where unchecked by default. I already tried to mess with those setting with no luck

I need to have this phone working by today evening and Im close to resetting it’s once again but really I have no idea how could this happen and whos contacts are those, especially on OS which flags itself as very secure.

I already have been using this XA2 before and never had this. Also I’ve been using it with my only one simcard that I have for years which sat in many different phones before with no situation like this. But I think after reset nothing sim related should be affecting this as sim where no inserted yet

Have you checked the import file?
I do not see any way for SF Images to generate contacts.
Did you use an official build?
Are there any cloud services active?
CardDav or Exchange maybe?

Did not checked it. Generated it on 10 II, copied to XA2 and start importing which told me it have 134 contacts to import and imported 134, but then contacts show over 600. How can I verify this file?
Yes, offical build whit licence
There aro no sevices active, as I said, fresh reset, only logged to jolla account

SF does not invent contact data afaik. So checking how many records are in your import file might be a good idea. It’s xml.

So in imported file are only 134 which are mine. There no other contacts. So this is related to this XA2 I think, but really, how?

Also, asking once again can I somehow remove those contacts bypassing the contacts app? I really would avoid reset, if removing those will be quicker

GMail tends to collect senders etc and put them into your (google) contacts.

I meant that the export from the old device perhaps gathered them from somewhere on that device. Not sure, may also be old SMS conversations, calendar invitations or something like that.

If you exported 134 contacts from your 10 II with SFI to a freshly reset XA2 with SF and in the end there are 600 contacts, these contacts must come from somewhere.

They were either on the 10 III or on the XA2 or in your import file or they were gathered over an external account.

I do not see any other way.

How many records does your import file contain?

Still it doesnt resolve that none of those contacts are mine (Im sure of it). Also checked the file I exported (From Sailfish 10 II) and there is nothing but my 134 contacts. It cannot be old SMS Conversations etc as I didn’t import them. It’s fresh SFOS install without any data from other devices, services etc. And there where ZERO contacts before importing

One explenation that comes to my mind is that contacs may be from prievious user of that phone as it wasn’t bought new. But HOW could they survive reflashing device to SFOS? And also, why they wasn’t shown before as I was importing contacts more then once?

EDIT: Stil I want to get rid of them, anyone can help? 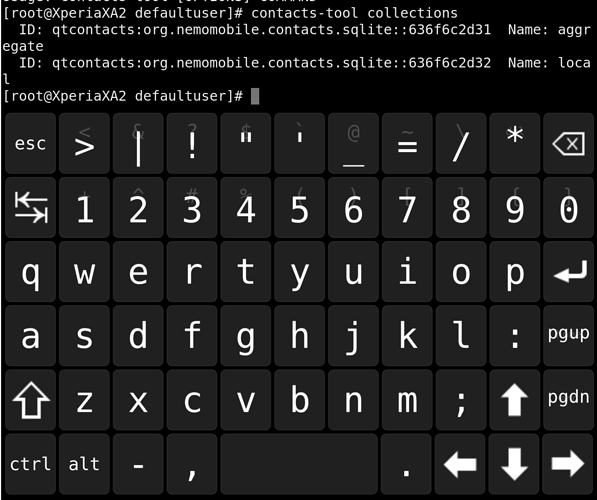 contacts-tool show there is two sets of contacts, aggregate and local, can someone explain this?

Yes, this is implemented and working from the GUI in 4.0.x When you create a contact, you can choose the addressbook it will get stored into. If that addressbook is managed by a sync plugin, any contact you add to that addressbook will be upsynced to the remote sync provider, etc. There is also a read-only “aggregates” addressbook, for display/selection use cases. Contacts which are either manually linked together by the user, or heuristically determined to be the same, are “aggregated” toge…

So this is essentialy two sets of same contacts? Local and “remote”?

Anyway as I said in my first post I needed the device to be working by evening as Im selling my 10 II and still waiting for my new daily driver to arrive. So, after reset I did exactly same procedure importing contacts but this time it worked out fine without any bizzare contacts.

Small things like this forced me to phase out of SFOS as my daily driver and really destroyed my dreams of having real linux on my phone as n900 became obsolete. And really maemo was way better unfortunately
(A few hours later)
So after device is configurated there is no problem like this again. All accounts are connected everything is linked correctly still having 134 contacts. Let me just explain that this exactly same setup as i had before. Could have been that it was some kind of very rare bug, but:

and in the end there are 600 contacts, these contacts must come from somewhere.

So any bets on from where really those contact came, Im really sure guys that those weren’t mine at any point of time

Are you on Telegram? Did you allow Telegram to have your contacts? Telegram sometimes messes up things.

So any bets on from where really those contact came, Im really sure guys that those weren’t mine at any point of time

I had that kind of party when I was younger.