State of the SDK on Linux

Hi! Not trying to sound pedantic here, but it’s kind of ironic not to be able to install the latest [ as of this writing, 3.1.7 ] Sailfish SDK on updated Linux systems with the latest OpenSSL, making it basically impossible to develop apps for Sailfish, a Linux variant…on Linux. I don’t think that Jolla wants to scare off potential app developers, who indirectly contribute to the system as a whole, who work exclusively on Linux (like me), because they are unable to even install the SDK.

My two advices would be:

I ran into the same problem with openssl when installing the SDK on openSUSE 15.1, and found this post on TJC:

Essentially, libsl 1.0 is still required because the SDK still targets Ubuntu 16.04, which does not support libssl 1.1. Apparently, that is something they are working on – Ubuntu 16.04 will be eventually dropped as a supported environment, which then allows updating the libssl version.
Applying the suggested workaround in that thread does fix the installation issues however.

What other issues are you experiencing on non-Ubuntu variants? It seems to work well on a fairly large number of distros, judging by the lack of distro-specific complaints about incompatibilities that I’ve seen on TJC.

Maybe I didn’t make my points quite clear yet.

First, well yeah, I saw that post and the proposed workaround which, as commented right there by another user, only leads to another error, making install impossible.

Second and most importantly, ‘oh yeah just install a four-year-old Ubuntu version and/or an EOL-ed OpenSSL version’ isn’t quite a solution. The message I was trying to convey is that it’s ironic that Jolla is openly caring more about the SDK working on Windows and Mac OS X than on Linux. Hence my suggestion to make sure the SDK can be installed and works as expected on at least one modern (maybe even the latest) version of any Linux variant.

I’m trying to install the latest SDK via VirtualBox running Ubuntu 20.04 and am getting this error message:

Virtualization technology not installed: You need a working VirtualBox or Docker installation. 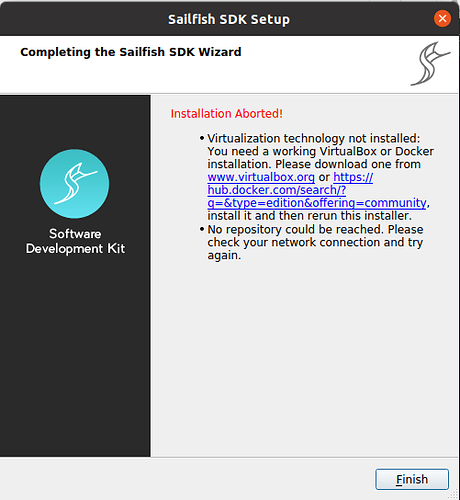 I am using VirtualBox 5.2.44 (latest in 5.2.x line) and the latest Ubuntu 20.04 with updates and build-essentials. The VM has the VBox extensions installed.

Any ideas of how to force the installer to accept the environment? I took a look at the “–help” for the SDK installer, but didn’t see anything overtly applicable.

EDIT: Sorry, please ignore…I was trying to install the SDK from within a VirtualBox instance, not from my host system. Didn’t realize the SDK would setup its own VBox.

Sorry for replying to my own post, but here is the output from running the latest offline SDK installer using the “-v” verbose switch: