I had Android 12 in the 10iii and I have installed sailfishos without going down to Android 11.

Thanks for these replies! Tried it and most things went fine. I though had several “WTF” moments:

Not sure if issues or if that’s “just as it is”:

Probably “just as it is” and unrelated to any Android version:

Anyway, otherwise seems to work fine. Didn’t have a phone call yet (just a missed call

How do I relock the bootloader, btw?

When restoring the backup from my XA2 from a microSD card it at the end stated (in German): “Error: Couldn’t load notes” with a √ behind. And indeed, the Notes application is empty. But not only the notes are missing, also all contacts and calendar entries, i.e. the most important stuff.

Yup, same here. WTF, Jolla? This is indeed a dealbreaker, when the backup cannot restore the phonebook on another device!

Btw: I flashed SFOS onto the device when it ran Android 11.

REPRODUCIBILITY: Always OS VERSION: 4.4.0.64 HARDWARE: Xperia 10 III UI LANGUAGE: EN (UK) REGRESSION: DESCRIPTION: I have tried to restore a backup done with my XA2 into the X10III, and when it comes to the Notes, it fails. Due to the structure of the backup files, the folders before notes (calendar, galley, accounts…) appear to be properly restored. However, the folders after notes, are not restored. I tried to restore a backup done to the sd card, i.e. including gallery files and also w…

I reflashed following your sequence and the screen wake-up problem ([4.4.0.64] XPERIA 10 III - Screen wakes up for no reason -> Battery drainage - #7 by nephros) appears to be gone.

Apparently, selecting the proper Android 11 version from which to install SFOSX is a big deal.

hi folks, I am stuck on connecting Xperia 10 III to windows 10 laptop. Emma doesn’t see the device. Also fastboot devices command in DOS returns empty. seems I am missing the right driver, but Windows says latest android usb is installed, also I installed Sony;s xperia drivers sa0114adb.inf from sony site. Tried USB 2 and USB 3 ports. still phone is not visible by windows. The sequence of the steps and software versions ?

Guys does anybody know any tips on how to keep volume up button pressed plus plug in the USB cable end into Xperia 10III at the same time in order to get a blue light? because I am always getting red light and never blue. (USB debugging and developer options are on. wifi is on) thanks.

It starts with red light and then turns blue few seconds later if you had the up volume button pressed while plugging usb in, so red light does not mean it went wrong, maybe this is what’s happening?

Thank you for reply! yes, I had it turn blue (first red and then soon blue) twice out of about 50+ attempts on connection. On a second time I managed to unlock bootloader successfully, but did not have a chance to Emma down the android version from 12 to 11, and now I can no longer get it blue to complete the process of android downgrading with Emma. It never turns blue again (another series of about 20+ attempts). It might be that I got a defective unit in this particular functionality. ?

For Emma you need to put the phone into bootloader mode not fastboot. Turn the phone completly off, holf Volume down and insert the USB cable, the light should turn green or first red then green.

super, thank you! That was not clear from the doc. will get it going.

one more time thanks for help, guys! Here is the main tip which was my show stopper with getting blue dot (or green dot for that matter).
Hold the Volume UP button and simulatinustly insert the USB cable other end into the phone. Do not release the button!
Keep holding it, until the light turns on Blue! I was releasing it as soon as cable got connected solid. go figure. +))

forgot to mention, driver. On windows 10 Pro 64bit (dell laptop) latest and greatest as of today, I used this new sony driver:
https://developer.sony.com/file/download/xperia-10-iii-driver/
instead of recommended by Jolla sa0114 (which did not work).

well … some weeks ago I finally got this phone AND a charger - unfortunately it is using Android 12 already and “Emma” tells me the device is locked, even though I unlocked it … Could anyone of you sit down together with me so that we can make it work? … this is the first time I’ve ever done anything like that and I am sorry but I don’t understand why even when unlocking it I still get the message that it’s locked … do I need to insert the SIM-card in both slots and try unlocking it twice? … it’d also be helpful maybe if we could do this in real-time maybe … via a conversation or call with “Discord” maybe? … Can you please help me? Thank you!

tried unlocking via this 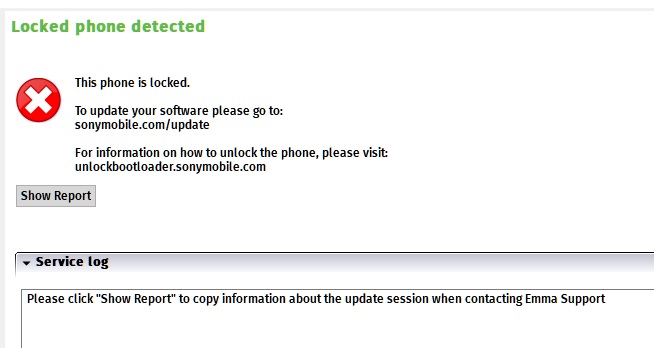 “Emma” tells me the device is locked, even though I unlocked it

How did you “unlock” it?

Are you getting the warning message about unlocked bootloader at power up?

EDIT: Sorry, I was confused. Thanks @jameson for pointing out my mistake.

while holding the VOL- and plugging in the USB cable

For Emma you need to hold Volume-Up and power.
For flashing (fastboot) it’s Volume-Down and power.

Not quite, it’s the other way around.