What is “Captive portal login”?

Really weird term, but here it is: 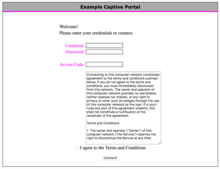 A captive portal is a web page accessed with a web browser that is displayed to newly connected users of a Wi-Fi or wired network before they are granted broader access to network resources. Captive portals are commonly used to present a landing or log-in page which may require authentication, payment, acceptance of an end-user license agreement, acceptable use policy, survey completion, or other valid credentials that both the host and user agree to adhere by. Captive portals are used for a broa...

Aye! … Thanks, still have no idea how to translate this, have to dig deeper

that’s the web page that would be displayed when e.g. you connect on a Wi-Fi network when at the hotel or an airport.

It seems so on first sight. But that’s actually how these portals work (or at least how I understood it).
As soon as you connect to a public network requiring any sort of login or agreement to their terms of use, your network requests are redirected to the networks landing page (aka portal).
You can see the effect easiest when opening a bookmark / recent page in your browser: You’ll find it always opens the portal instead.
Until you agree to the terms / login to the network instead of blocking access altogether any network traffic is ‘caught’ and changed to open the portal page instead. Hence it’s a captive portal.

I’m well aware of the phenomenon, and also the principle of how it works… but even with that, the term was not obvious to me. (although i learned it a few years ago) So i think it’s a pretty bad name. After all the portal is not captive, you are… so something about blocking or similar terms would have made more sense. This just becomes jargon

I think in this case you can’t interpret ‘captive’ as narrow as in the sense of ‘prisoner’ only. I’d read it more in the direction of ‘bind’ and ‘cords’. In the corresponding metaphor the captive portal ‘slings you in’.

Anyways, jargon it is. But the semantic motivation still remains mostly transparent still when comparing to other terms.
Wouldn’t translate it like that into German, though. I chose a wording along ‘WLAN login portal’

Wouldn’t translate it like that into German, though. I chose a wording along ‘WLAN login portal’

I did the same thing in Dutch, ‘Wifiaanmeldingsportaal’ = ‘WiFi login portal’. There’s no way to translate ‘captive portal’ properly because it isn’t proper English in the first place.

“Official” term translation uses “guard page login” in Finnish, but I have never heard that used before.

One which I have heard before is “Barred/locked web portal login” (some sort of web portal seems more understandable for me) , which kinda explains the idea ie the portal blocks your queries before login.