Hi, I have Sailfish on my Xperia X right now, and is has a serious issue that makes it unusable.
I want to go back to Android, and I have found several questions about it on TJC, but several differing approaches are proposed there as well as in other sources. My particular situation is different from what I’ve found:

It is suggested that you can flash any ROM from a Linux box using Flashtool, but instructions are meager, and I can’t tell whether they also apply to my case, where there’s Sailfish on the device.

Also, it says to flash an *.ftf file, but there isn’t one included in the downloads from xda.
There is, however this SW_BINARIES_FOR_XPERIA_ANDROID_9.0_2.3.2_V9_LOIRE.img file (as opposed to SW_binaries_for_Xperia_AOSP_M_MR1_3.10_v13_loire.img found on Jolla’s site), but this isn’t mentioned anywhere in the instructions for Flashtool.
So, I’m quite lost… Anyone has done this?

Do you think I need to install an older Android AOSP first (which one?) and then upgrade to 10 (but all just with Linux), or is there a way to flash the Android 10 directly?

Oh I did the same hard way. Especially without windows. Here is the workflow (the only one). Adb and fastboot tools needed.

From here you are free to flash any custom roms. It is the only way, because without reverting to stock a custom rom would be a mess.

here is the link to newflasher. Check all the questions in the flashing progress carefully.

Thank you for confirming this works with Xperia X a device released in 2016 as inference is that Newflasher applies to Sony phones including and newer than the XZ Premium here:
https://github.com/newflasher/newflasher

Which Android version would you recommend flashing?

Start the script with plugged phone in flashmode (not fastboot).

Newflasher is letting me down it seems. In flash mode, it seems to read the usb device in a mode that Newflasher doesn’t support - look here:

Hi there, I succsessfully downgraded using newflasher couple of days ago, then I accedentaly updated firmware (big fingers), so I tried downgrading...


The gist is that this device (Xperia X) would be incompatible with Newflasher, but if you did it, then how…?
aspergerguy 5 September 2020 16:58 #6

In regard to your original query where “It is suggested that you can flash any ROM from a Linux box using Flashtool”, as far as I can remember it doesn’t matter if you are downgrading or upgrading provided the correct “wipe” boxes are ticked before flashing else it won’t boot. Although attached is a guide that I found at the time I am not sure if this just appertained to downgrading Xperia X to allow saving TABackup. Sorry I can’t provide credit to original source of screenshot.

With regards to SW Binaries these “blobs” only have to be added to Sailfish OS as are part of Sony “Stock ROM”. Remember holding down volume up and power button in case device becomes unresponsive until “three vibrations” and ensure battery full before flashing. Bear in mind installation of TWRP makes “wiping” of device a lot simpler:https://forum.xda-developers.com/xperia-x/development/ub-twrp-v3-2-1-xperia-x-t3786431 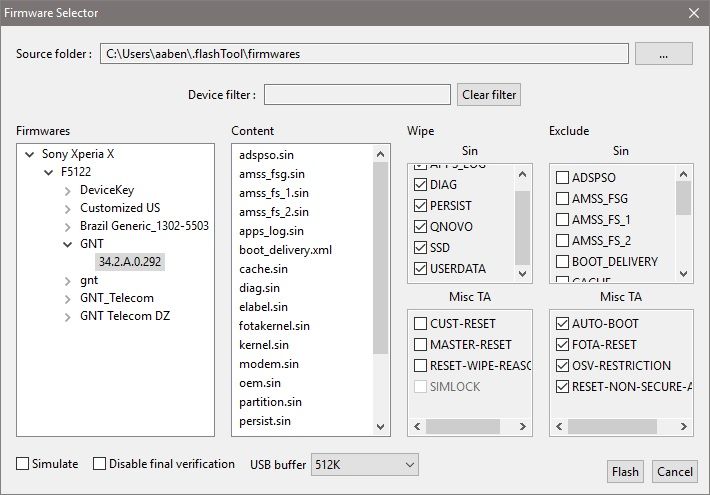 Okay, I am now on stock Android 8 flashed with xflasher. But back to the problem that I don’t have an ftf file that Flashtool seems to require.
I also installed TWRP now, I think:

I’m trying to flash Android Q onto the Xperia X. It has the the stock Android 8 from Sony right now, but can’t figure out where to go from here.
this is what I want to install: https://forum.xda-developers.com/xperia-x/development/rom-q-builds-t3969967
The instructions say “Copy to SD card and flash with recovery”. I copied the .zip file to an SD card which I inserted into the Xperia X. I installed the zip file using TWRP in recovery mode now , but now the phone isn’t booting, it’s stuck on the Sony logo.