Hi there,
I am trying to install Sailfish OS on my Xperia 10 ii from windows OS.
Everything seemed to be ok, but when I get to step 8.5 from the instructions, the following message appeared: 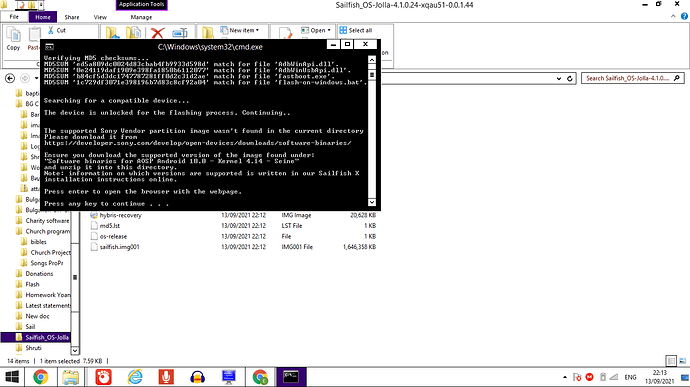 When I press any key, then it opens the laptop browser with a list of Sony software binaries.

When I download the required one, then everything get repeated again and again - the first message and then opening the Sony web page again…
Any idea where is the problem??
Thank you in advance.

Have you double and triple checked that you unzipped the file in the correct directory? Some ZIP utilities can be a little confusing as to where they are unzipping the contents. E.g., it might have created unwanted subdir where it seemed to be extracting . . .

Or the other -most “wanted”- error:
after opening the CMD console (as admin it will start in %windows%\system32 by default) did you go back to the path where all the downloaded stuff is?
Like
cd /d C:\path_with_downloaded_stuff

Following the Jolla instructipns I use the File Manager ( windows sign + R) and go the the folder where Sailfish X and Sony binaries are.
Than I double click on the file " flash-on-windows.bat". It opens the console which says it can not find the Sony binaries and tells me to download it and unzip it in the same directory.
As much as I can see, it was already in the mentioned folder. Can not understand why it can not be found??

Windows-R is run a command, not the File Explorer (which is Win-E)

Double-checking a BAT will just launch the CMD shell (inside c:\windows\system32) but does change to the directory it was started in.

For that you would need a

at the beginning of the script.
Maybe a hint for sailors if not already there?
This would solve those questions about downloaded stuff not found!?
And it would work for normal user as well as started as admin.

Could you post a screenshot of the contents of the folder? Perhaps some file doesn’t have the right filename.