DESCRIPTION: If you try to open a URL link (a web browser shortcut placed on the home screen, for example) the new ‘Open With’ dialogue gives you the option of opening the link with apps that can’t open links. In my example I am given the options of the SFOS Web browser (OK), Adobe Acrobat (Not OK and will error if selected), an Android wallet app (Not OK and will error if selected) and Firefox (OK).

I do not know what determines which apps are displayed on this dialogue. I have many more, both suitable (e.g. Opera web browser, which is NOT shown), and multiple other unsuitable Android and Sailfish native apps (which are not shown).

PRECONDITIONS: A file you want to open, e.g. a home screen URL

EXPECTED RESULT: Only show those apps that are capable of opening the selected file type. 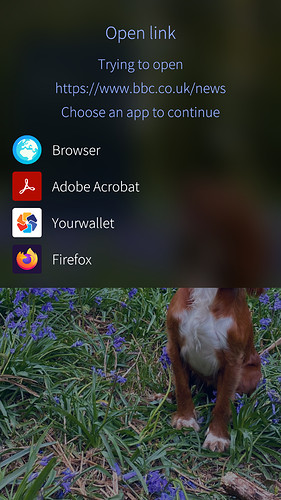 The same happened to me recently, and didn’t know why… App chooser had been working normally, then suddenly it started showing random apps that were totally n/a. I wondered if some older, non-updated app had messed with mimetype file or something. Also, after I uninstalled the two n/a apps, they still showed up in app chooser, icons and all. I had to go through and find the remnant files and manually modify…

Well, I am just a normal ‘consumer user’ of SFOS. I have no patches on my phone, I have not edited any configuration files, and all my apps have been downloaded from either the Jolla Store or Openrepos (SFOS Native) or Aurora Store (Android), so I am confident this bug is not due to me messing something up by mistake.

And it started happening immediately after upgrade to 4.3 with the new ‘Open With’ Dialog - and that is important because no other changes have been made to the phone (e.g. downloading new apps, etc) between the upgrade to 4.3 and this bug appearing. Hence it looks like a bug in the way that the new ‘Open With’ functionality works (or doesn’t, as seems to be the case).

Yes I have the same problem.
Piepmatz is no longer displayed in the selection list.
I hope this will be fixed with 4.4

Would be interesting to figure out what they read to determine that.
Obviously this is because the apps themselves declare that they handle the content/protocol in question, presumably http links in this case.
Are the apps over-declaring (and Android has the exact same issue), or is the logic wrong?

Piepmatz is no longer displayed in the selection list.

Hope it stays that way, because it sure isn’t a browser.

Yes I have the same problem.
Piepmatz is no longer displayed in the selection list.
I hope this will be fixed with 4.4

Now that’s odd. If I tap on a tweet as part of my twitter feed on the events screen I get the ‘Open With’ dialog and Piepmatz is shown along with the browser and some other inappropriate apps. Selecting Piepmatz and the tweet opens perfectly in this app. It seems there is something very random going on here. …

Hope it stays that way, because it sure isn’t a browser.

No it isn’t, but Piepmatz is a very good app for looking at your twitter feed, so I hope it doesn’t stay that way

For native apps they can filter on domain, i.e. only handle twitter links, so i still maintain it has no business pretending to be a browser.

The question is, why then do I only see “Aptoide” as a possible selection next to the browser ? That makes no sense at all for tweets. I used to be able to select the app Piepmatz to display my tweets from the home screen. Just click on the tweet and select Piepmatz and bang I was on Twitter

For native apps they can filter on domain, i.e. only handle twitter links, so i still maintain it has no business pretending to be a browser.

Agreed, but neither, in my case, does Adobe Acrobat or Android Wallet either, but the dialog still shows them nonetheless. There must be a configuration file somewhere linking mime types with apps capable of handling those mime types which is either getting corrupted or, as you say, being maintained with incorrect logic.

I have the same version of Acrobat on my Android 9 XA2, so I just tried the same sort of open operation on a Home Screen URl file placed there by Chrome (‘Add current web page to home screen’) and I don’t get the option to try opening it with Acrobat, only web browsers.

So my speculation is that this bug is unlikely to be a case of apps ‘declaring mime compatibility’ incorrectly.

I had this with Webcat on Jolla1. I got rid of the problem by deleting the apt file found in .local/share/applications/mimeinfo.cache. I have no idea if this is applicable to Xperia devices.

But if I did that (I won’t coz I’m just a dumb old consumer user who doesn’t want to be concerned with editing configuration files just to get something as pedestrian as a mobile phone working), say for Acrobat for example, then wouldn’t it remove the possibility of this app opening files in this way completely, including files that I would actually want it to open, like pdf files?