How to access Calendar and Contacts db as normal user?

I have made python scripts to search for text into SMS and Calendar databases.
To display the contacts names in the SMS search results, I also need to access the Contacts DB.
But I noticed the DBs are not readable as normal user:

Is there a way to read these DBs without becoming root?
Thank you by advance

I guess this is related to the fact that contacts cannot be restored after 4.4 upgrade, and android apps cannot access them. Big bug.

Also, I can access Contacts form Android. Is that also abnormal?

I was going to suggest python3-dbus, but I’m not sure that won’t have constraints in a plain script run by user.

Maybe there is a solution with something like ‘chmod g+s’ on your script but I’m not expert enough to know the details to achieve that.

Oh! I didn’t know the difference between devel-su -p and devel-su. Thanks @phklrz
Changing the rights on the script will not change the user’s right to access the DB, unfortunately.

Running the script as privileged could be a way.
But this increases the number of manipulations (password for devel-su -p) before using the script.

What I don’t understand is:
When I open, e.g., the People app, I can access the contacts DB without password.
How could I imitate this behaviour for a script?

Or can I just change the DB rights to defaultuser instead of privileged?

But this would be stupid and create a security fragility, isn’t it?

To avoid “bricking” issues I experienced several times when SFOS3.4 suddenly became unstable, including when trying to upgrade, I had to do this:

This is where problems appeared: data restoration failed, contacts and other data became unavailable for most apps, apparently due to undocumented changes in Contacts structure and/or permission management, and/or Sailjail that was not implemented yet in SFOS3.4. Of course I have no clear explanation. Still investigating with my very little knowledge and competence in system behavior. My device is just much less efficient than before, many apps are no longer usable, my contacts are lost,
etc. Sad story.

One way would be to wrap your script in a qml app that has the Calendar permission. The same thing should be able to be accomplished running your script from a desktop file with same perms.

I’ll have a look at your script later…

It’s not really an answer, for the script scenario, but I had remembed:

I forked it, added

And sqllite searches in contacts and calendar work.

This is a pre-release of the adapted SearchNemo app which you might find meets your needs. 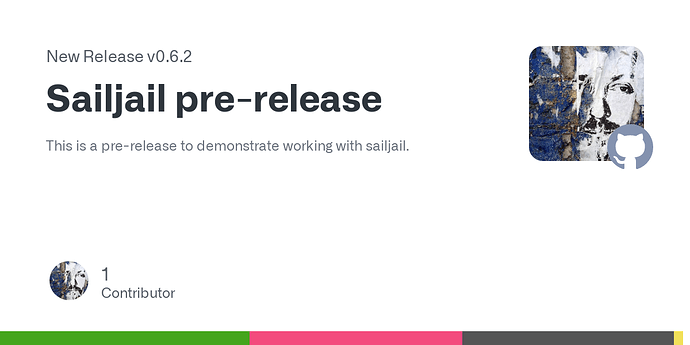 This is a pre-release to demonstrate working with sailjail.

@poetaster many warm thanks for having taken time to explore and explain, and even code something.
I am really grateful.

That would be one of my biggest wishes!
But for now, bash and python scripts (and some arduino C) are on the top of my capacities.
I opened the sdk, compiled the example “hello sailors” app but didn’t even find a way to add a text entry dialog.
No idea what qml is, alas, big alas. BTW, I’d give a lot if someone would give me a quick introduction step by step to it: sleep at my home, visit my city, cofees and beers or even pay what I could pay.
Because alone by myself, it is too long, too wide, dunno what rope I should pull!

Back to subject. Great, very great, even with sources! Will try right now!

Miracle, I compiled it for arm7, installed, launched.
Thinking: maybe you meant it as an example / starting point, or?

Instead, with the scripts, the result is more --human-readable, contextualized.
But again, maybe you thought it as starting point. And I feel having to start writing a poem in martian…

Damn. Had I known you had armv7 I’d have posted an rpm. Ok, but you’ve got this far. I didn’t look at the display attributes, but know it’s focused on text, so it doesn’t really ‘know’ about the structure of calendar entries. That could be extended.

Still, since you’ve gotten this far, it makes more sense to wrap your script. A relatively simple example instructional apps:

Creating an application in Python

The SearchPage.qml of SearchNemo shows how one can get input and pass it to a function. The QML In short:

I’ll see if I can find an example that’s a closer fit to your purpose.

Just occured to me. I wouldn’t bother with any of this unless I wanted to share. I’d just use root. As long as your script is just reading, it’s not such a big deal

Thanks, yeah, @pherjung gave me the link to this python example already.
But when I saw smoke out of my brain, I stopped trying.
Now I domesticated the sdk a bit, I’ll try again.
Thanks for pointing the way to get an input. This helps too.

Just occured to me. I wouldn’t bother with any of this unless I wanted to share. I’d just use root. As long as your script is just reading, it’s not such a big deal

Hm, yes/no.
Well, things are linged together.
I’d prefer being able to access the DB as user because

Ah, ok. Well once you get your head around qml → python and back you’ll be really happy

And if you have a secondary user, you’re really going to want to have a ‘proper’ wrapper to manage permissions, etc.

Let me know if I can help if you get stuck!

Hmm…I believe I am stuck!
I found the way to make various text entries in the TextInputPage of the componentsgallery example in the SDK.

But I don’t understand where the entered text goes, in what variable and how to use what the user entered.
And also how it could be articulated with my python code and where I should put my python code.

Well, lots of very devel-noob questions, I am afraid.

The text is kept in the TextField’s ‘text’ property, which you can use qml’s builtin javascript, or access from the Python type.