Connect to news.server - tin, a news reader for SFOS

Hello,
is there a solution to connect to news.server like news.netcologne.de?
I can’t find a app nor an account for this in SFOS.
Thanks!

I think newsgroups are not supported in SFOS, unfortunately.
It would certainly be unique to support news on a mobile device

While I doubt someone will make a GUI newsreader, it should be possible to get a CLI/ncurses based one running.

Alpine, slrn or gnus come to mind, and of course emacs.

Would that be sufficient?

The Piao Hong newsreader I mentioned has multiple problems, but I do use it daily. (If you try it, use dark mode, otherwise it won’t scroll - which is bizarre.) I did use it on my Jolla C for a while.

I thought of using tin, but (apart from having to compile it for arm - which I thought I could probably manage) the main problem was using it with a virtual keyboard - it restricts the screen space too much. You’d need a separate keyboard. 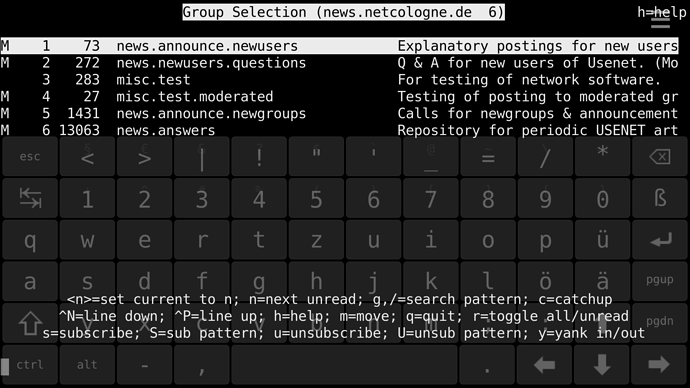 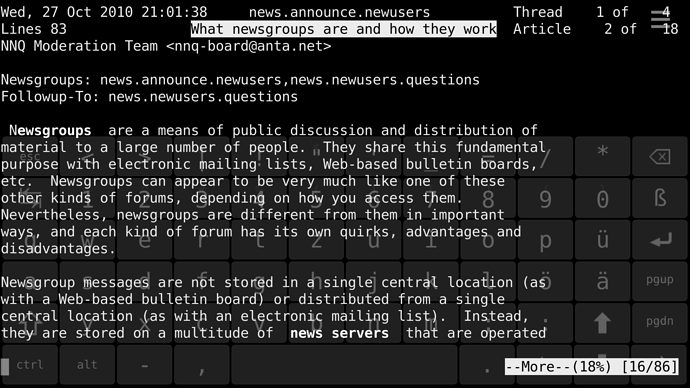 Sources downloaded from
http://tin.org/
and compiled on device.

Pretty much yeah. Although I’m more of a Pine/Alpine guy myself.

Brilliant! Can it be packaged?

TBH, I mainly use my Jolla-C as an SSH terminal these days. I’m typing this on a Pixel C (which has a clever magnetic keyboard). Wrong forum, I know, but how can I run that on a bog-standard Android device?

Yes, perfect!
I have problems to comile with configure.
Can you post a howto?

Well, first of all you don’t need to devel-su to configure / compile. Plain user will do fine.

The script can’t find a compiler, so you will have to install one. devel-su pkcon install gcc should work there. It’s likely you will need some more dependencies as well. At least bison and ncurses-devel.

However, it’s a bit dangerous to use the device itself to compile software. If at all possible use the SDK, OBS, gitlab or github build services, or coderus’ docker image to do it.

If you decide to do it on the device, do use a chroot to install devel packages , some of them can break your system!!

That being said, this is what I used to get it running. You don’t need to make install by the way, it will run right out if the build dir:

There will be some final configuration required to read, and especially to be able to post news. Haven’t tested any further.

Brilliant! Can it be packaged?

Great. I’ll install it in a day or two. I’m interested to see how the navigation keystrokes work in practice.

I needed to access the mozilla support newsgroups in Android, but Piao Hong newsreader doesn’t work with them due to a bug. So I wrote my own, in python, using the Kivy UI. Here’s a screenshot on my 10" tablet: 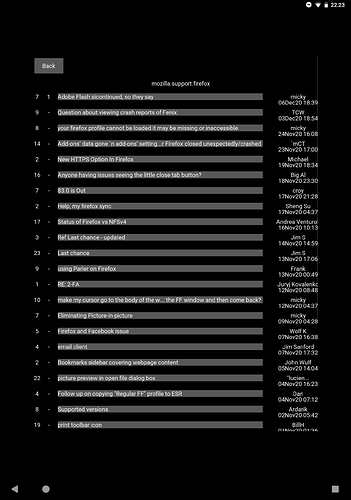 I’d also like an app to leech nzb files.

I have it running: 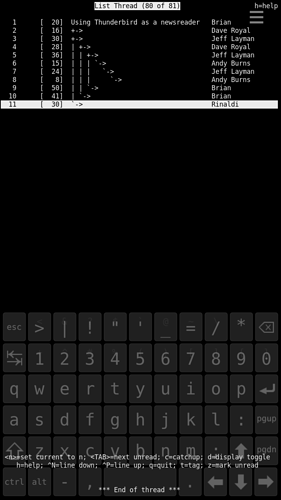 Screenshot_20201208_001720×1280 42.8 KB
I have the keyboard on fade - ‘move’ is no good. Is there a way of splitting the screen between the terminal and the keyboard so they don’t move or overlap?
One thing that doesn’t work is server authorisation. I’ve transferred .newsauth, which should get me into eternal-september, but it doesn’t. Something missing, I suspect.

There is one more keyboard option: off

And no that is how fingerterm works.
I personally do like the move option way more than fade.

But maybe try it out with toeterm instead of fingerterm. I guess you like it better!?

To navigate tin you only need half a dozen keys: left, right, tab, space, y, n - maybe a couple of others. But you use them constantly and the text mustn’t move. A one-row layout would do. You need the whole keyboard to compose, but for that you can shift the text up.

Keyboard layout is defined within fingerterm/toeterm. Maybe it can be modified but that would cripple the whole terminal experience (and may put you in a state without terminal usage possibilty).

Again, try toeterm (now with fade ;)). It is much more convenient than fingerterm.

Managed to post with it.
Installed vim-enhanced. Although ‘vi’ calls vim, tin doesn’t. Had to symlink /usr/bin/vi to vim.
No luck with .newsauth and eternal-sempember. Very odd. I copied the file from SuSE where it works. Forgot the -A arg.
rtin -A -g news.eternal-september.org

Works best over SSH with a separate keyboard!

You’re right - toeterm is more usable than fingerterm. Makes tin just about usable, IMO. Better on a bigger device than this Jolla C.

I notice it exhibits the same effect with tin that I described here:


There are white stripes after the thread names.