Bug in Email Client: part of text is invisible (not shown/rendered)

A part of a received email text is not visbile. Only when responding, the full text is visible in the response email. That is why i noticed that a part of the received email was not shown

Depending on the Email client on other devices, two pictures where shown within the email text or as an appendix to the email. I guess the problem is caused by the pictures in the text because only that text is shown by the SFOS email client that occurrs before the first picture. It appears to be a html rendering matter that causes skipping of all text after the first image

receive an email having text with embedded pictures

Only the part before the embedded picture is shown

I recall quite a few similar issues on TJC, some related to pictures suppressing text. Search on ‘email blank’.

I did a search on TJC - but I did not use the term “blank”. Now, I did a new search and still could not find this topic in TJC. Frankly, this surprises me a bit

Could you provide us with a link, that would be great

The one I recall - because I raised it - was this one: https://together.jolla.com/question/189622/email-rendered-mainly-blank-unless-images-displayed/

But I didn’t say I found this particular issue, just that there are several threads about all or parts of an email being blank: 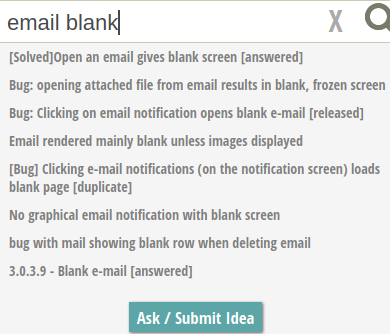 Maybe one of those, or a similar search will find something.

Thank you - that topic I saw, but it is different. In my case I see text (in fact, a lot of text) and thus I wrongly concliúded I saw the entire email. Only when responding to the email it occurred to me that there was even more text and I was wondering why this was invisbile in the nornal email view. Only after I opend the same email with an iPhone I saw that I could see all text just up to the first embedded picture.

Was TB viewing a plain-text, or ‘simple html’ version? It would be useful to know how the email was structured, in terms of its text and image parts. Ctrl-u in TB will show it all.

Was TB viewing a plain-text, or ‘simple html’ version? It would be useful to know how the email was structured, in terms of its text and image parts. Ctrl-u in TB will show it all.

The mail text is shown as soon as you tap “show images”, but not before that.

Is this the same bug?

HTML which includes embedded images which are themselves pdf attachments seems strange to me.

If it’s a ‘multipart/alternate’ email - i.e. it contains both plain text and html - then Thunderbird has three ways of displaying it:
View > Message body as:
Original HTML|Simple HTML|Plain text.

TB includes the gecko browser so it should display ‘original html’ correctly.