So I was wondering that because of for example Sony Xperia 10 phones are quite tall due the 21:9 aspect ratio, could the typical application grid in SFOS be replaced with Windows Phone style application list instead? Like this 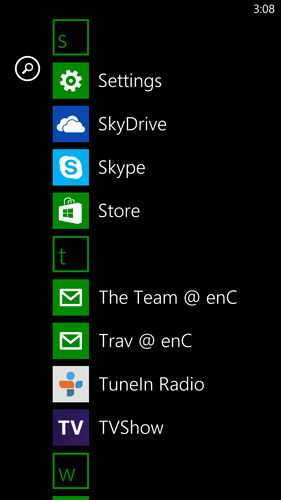 720×1280 28.5 KB
So basically you could scroll the apps just by swiping up and down, and maybe even search them just by inputting character by character in a search field. This feature could be switched on/off from the menu. I mean I’ve seen applications already listed with this vertical style in some thirdparty app settings, so adding this kind of feature shouldn’t be a stretch at least I think so.

Anyway, the reason I request this is because these larger phones requires two hands in certain cases, and I think that’s just unergonomic. Besides I think that the UI should be usable with one hand no matter the size of the phone. And also the other reason I think this would improve SFOS is that because of the application grid could be bit too verbose sometimes, especially if you’re searching that certain app you don’t use daily but you have it there because you might need it sometimes, so a nice list with icons and app name on its side would be less distracting.

I loved Windows 10 Mobile and that was the best App drawer so far. But it wouldn’t work well on sailfish cause there is no home screen where we can start apps from. My app grid has the most needed apps on top of first page to have quick access.
Nevertheless a combination of that might be nice, but I can’t imagine a good solution right now to do that.

Alternatively you could set up alphabetical folders to get something similar.

You maybe right, I guess this could be done with a separate app then, but I’d rather have it as an integrated part of the SFOS GUI itself. Anyway, I do use the folders myself, but I usually store very rarely used stuff in them.

Anyway I think there could be a “room” to implement this, when you pull up the app grid, nothing happens when you try to swipe horizontally. Maybe swiping horizontally it could show up the application list instead, just an idea.

Anyway I think there could be a “room” to implement this, when you pull up the app grid, nothing happens when you try to swipe horizontally.

Had to try to understand that, but yes:
From the app grid swiping left or right does nothing, just swipe from the side opens notification/homescreen.
So we could have an app list with swiping to one side - cool idea!

You could also open this with a two finger swipe from the bottom: if you need to search for an application, you could start typing immediately.

I don’t like these multi-finger swipes.
But a search function would be good…

Yes exactly, I should’ve been more clear there so yes; if you want to get into the multitask screen you have to deliberately move your thumb to the edge of the device and swipe, this is why swiping horizontally in the middle of the app grid shouldn’t cause any problems.

And what comes to the search in the list mode, the search bar would be at the bottom of the screen. So it would be easy-to-reach.

What about a more granular way to steer the app grid extension?

Suggestion:
3a&b - flick or draw upwards as far as you want the grid to show. When finger is taken off, grid stays at this level of extension. This is a hybrid between a scrollable list and the current grid. This way every app is reachable in one-handed operation.

Additionaly this “slow extend” feature could be bound to the left and right display side (equivalent to the close gesture from the top) while the bottom center area remains reserved for the current full extension draw.

you can get Quick Launcher in Jolla Store, but this nice app is abandoned and does not work since SailfishOS 3.1, which is a pity.