i486 and armv7hl rpms are there since ages…

did I miss something or that’s it, no way to make the uploading…

I wouldn’t be surprised if Harbour doesn’t allow you to upload aarch64 versions, considering how there are no aarch64 devices yet.

Aarch64 is not yet considered stable in Sailfish, as was mentioned by Sailors from Jolla. You can ofcourse support it in your app, test it even maybe, but the libraries and API might change, so uploading in Jolla Store is not yet a good idea, that might hurt and confuse users later on.
There is no device out yet with an Aarch64 system software.
I think we will have to wait for Jolla to announce that it is considered stable.

By the way, I would be curious which devices will support Aarch64 directly from the flash image.

Like mentioned in the blog post (https://blog.jolla.com/sailfish-os-pallas-yllastunturi-is-now-available/), we don’t consider the aarch64 platform stable yet. We anticipate an ABI break, which means that all the aarch64 apps must be recompiled - that’s why we are not allowing them in Harbour yet.

So, how about now? I’m unable to publish a new version of my app because harbour expects me to provide aarch64 build as well, but the latest SDK that I just installed has no support for building for aarch64.

Am I missing something?

downloaded sdk today and it DOES have aarch64 target available

Maybe I installed an older version by accident. At least my emulator was not using SFOS v. 4.x yet

Are there some instructions for how to add the missing aarch64 target? 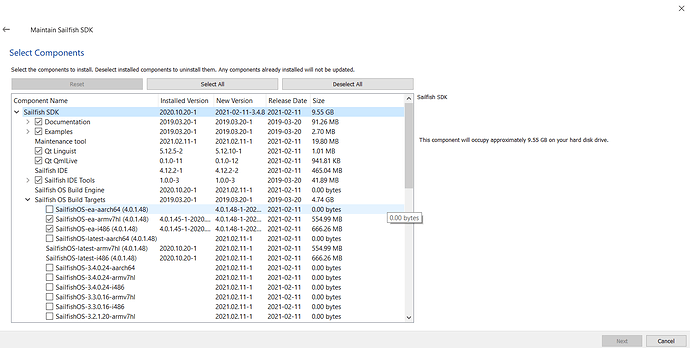 Might be worth trying again, showing on updates and add or remove components here (Windows though)

You might need to run the update step first, then add/remove.

But the short answer is update maintenance tool, update any components, then add the aarch64.