Sailfish OS 4.4.0.58 is giving me half the battery life I had with the previous version. Where I was ending the day at 60% to 70% battery, I’m now on 30%. On day one of the new version it was at 9% when I put in on the charger at 9:30pm; I had been testing out the new version, but it was still an astonishing result.

I updated from the previous Over The Air build. Whether this is a prerequisite for this behaviour I’m not sure.

Battery consumption should be about the same as it was for the previous release.

I routinely have the following five applications running (and have had all but one of them - Books - running continuously for the duration of the previous OTA release as well):

If there is additional information I can provide, I’m very happy to do so.

Make sure that the usual suspects don’t apply. 4.4 includes a tracker update, as such all your files might get reindexed, which causes increased CPU load for a while and as such decreases battery life. Are there any suspicious processes using CPU?

Same here on my XA2 Plus! I do not know what is causing this increase in the consumption. No CPU suspicious processes in my case, still more consumption than before.

There’s nothing suspicious, but I note that consumption has lowered a little on days four and five of the new version. It’s still higher than the previous release though.

I’ve been informally keeping track of how much battery everything uses. I’m not one for flicking between apps; I tend to sit and read Twitter for half an hour, or respond to Slack messages in a batch, etc. The additional consumption appears to be spread across all apps, native and Android.

But as I indicated above, the battery drain does seem less yesterday and today. I’m hoping that there has indeed been some settling-in process, and we’re now returning to a less profligate consumption profile.

When I had a problem with the upgrade previously, battery drain was one of the issues. Install “Crest”, show all processes and observe if there is a zombie process eating CPU. This was my case and it was largely solved by re-flashing the device.

I use Sysmon as well for tracking behaviour

An update after a fortnight or so with the new release. Battery consumption appears to have levelled up. Most days now end with 70%-75% remaining. There’s the odd outlier when I can’t think that I’ve done anything unusual, but there’s only 30% left at bedtime. Even so, it’s workable.

I have choosen a reflash since i had many problems with 4.3. In my experience my battery live on my XA+ DualSim is way better than before with 4.3 where i killed the battery within a day. So maybe the hints on problems with the update seems to be right way.
Good Luck

I don’t have a problem with the consumption of the Xperia X battery, but I have found that if I have GPS and/or NFC turned on, the consumption will increase significantly.

I thought the same at first (terrible battery life), but after a reflash due to a different issue, it seems to have calmed considerably. The attached picture is what I would consider a day of light to moderate use. Not bad. Using mobile data for most of the day. 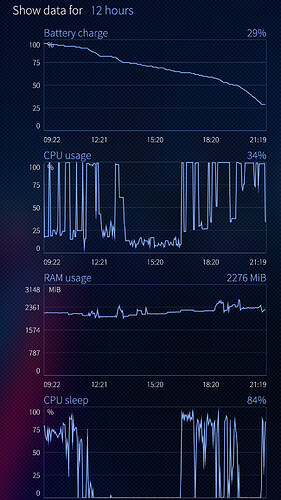 By the way, what is your average current taken by your xa2 during idle run?

My phone drowned for a while, after that battery drain has increased significantly.
I am wondering if there is a battery issue or some shorten circuitry causes problems.
Now I have to charge my phone almost twice a day. Average current now is about 200mA…

Edit: Watching on SystemDataScope charts, idle when display is off is: ~80mA, with display on: over 200mA, sometimes peaks of ~1A. Average is still about 200mA.